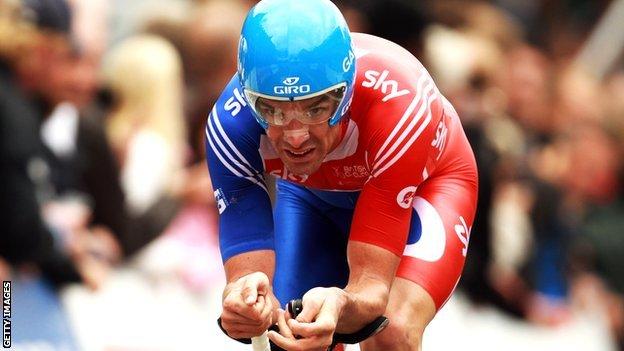 The 35-year-old Scot served a two-year ban in 2004 after he admitted taking performance-enhancing drug agent EPO.

"This is the strongest road cycling team Britain could hope to field. Including the women's line-up announced in June, Team GB have realistic gold-medal prospects in all four road cycling events at London 2012. The trick will be delivering the riders to the start line in the best condition possible - not easy with Wiggins and Cavendish both currently battling for Tour de France honours.

"Cavendish has already made it clear that he considers the Olympic road race his priority, at the expense of the Tour de France if necessary. Wiggins faces the tougher schedule: a few stages into the Tour he remains the favourite to win it, but he must ride the road race in support of Cavendish within a week of its conclusion and then go for time-trial gold a few days later. He is entering the most demanding month his sport can offer."

Millar is eligible to take part after the British Olympic Association (BOA) rescinded its lifetime ban for athletes convicted of doping.

Britain have not won a medal in men's road cycling at the Olympics since Atlanta 1996 - with bronzes for Max Sciandri in the road race and Chris Boardman in the time trial - and have never won Olympic road race gold.

Millar, the Malta-born Scot, was stripped of his 2003 World Elite Time Trial title following the discovery of two syringes containing traces of the blood-boosting drug in his home in Biarritz, France.

The BOA had previously ruled that no convicted drugs cheat could compete for Team GB at an Olympic Games.

Millar had insisted he would not seek to overturn the BOA's lifetime ban and even booked a holiday to coincide with the Olympics.

But the World Anti-Doping Agency (Wada) ruled against the stance in March and the BOA lifted its ban, clearing him to take part at London 2012.

Since returning from his ban in 2006, Millar became 2007 National Road Race champion as well as National Time Trial champion in the same year.

Millar joins Team GB sprinter Dwain Chambers and discus thrower Carl Myerscough as athletes previously banned by the BOA who will now compete at the Games.

He will race alongside Cavendish, Wiggins, Froome and Stannard in the men's road race, a 250km (156-mile) course, including nine circuits of Box Hill in Surrey. The event starts and ends on The Mall on 28 July. Spain's Samuel Sanchez is reigning Olympic champion.

Kenya-born Froome and three-time Olympian gold medallist Wiggins have been selected to ride the time trial on 1 August. The 44km (27-mile) circuit begins and ends at Hampton Court Palace.

British Cycling performance director Dave Brailsford said: "The final selection for the men's road race was a tough choice as we had a really strong squad of riders to pick from.

"We have selected the five riders who we believe are on the best form and will give us the fastest team for the race."

Wiggins, who will be competing in his fourth Olympic Games after appearances at Sydney, Athens and Beijing over the past 12 years, added: "We've got a good chance to win the road race with Cav [Cavendish] and it's a London Olympics which makes it very special."