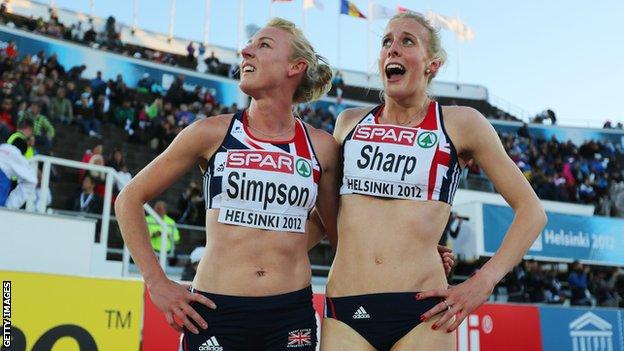 Lynsey Sharp is determined to justify her controversial selection in the 800m for Team GB's athletics squad for the Olympics in London.

But she was chosen ahead of four women who had recorded faster times.

"I feel it was a really brave decision. I am absolutely determined not to let them down," said the 21-year-old.

"I'm absolutetly delighted that the selectors have had faith in me.

"They have looked at my recent form and decided I was the one to go with for the Olympics."

Sharp ran a personal best in winning the silver medal at the European Championships but failed to make the 'A' qualifying time by 0.62 seconds.

Her inclusion in Team GB could yet be challenged, with head coach Charles van Commenee admitting he is bracing himself for a "heap of appeals" from athletes in a variety of disciplines after Tuesday's announcement.

However, Jenny Meadows, the 2009 world bronze medallist and a former European 800m bronze medallist, now says she will not appeal despite previously threatening to do so.

Marilyn Okoro and Emma Jackson have also run the 'A' standard this year but finished fifth and seventh respectively at the Olympic trials won by Sharp.

Jemma Simpson competed in Helsinki but finished seventh in the final behind the Scot, while Meadows was forced to pull out before her European Championships race after aggravating an Achilles injury.

International rules mean an athlete who has achieved the 'B' standard can only be selected if there are no 'A' standard athletes in that event selected to the team.

Van Commenee revealed that two of the six hours spent making the selections were spent on the 800m women and that they had decided to go with the woman on form.

"I feel bad about those athletes who have missed out," said Sharp. "I know I don't need to, but I can't help it.

"But I won the trials and I got a silver medal at the European and ran a PB when I was there, so clearly I am in great form and I've beaten all the girls that were in the picture, so I guess that's what the selectors have looked at and I'm really grateful for that."

Sharp follows in the footsteps of a famous parent, sprinter Cameron having competed at the 1980 Moscow Games.

"So it is really nice that I am following in his footsteps. He was 21 when he went to the Olympics and I am 21 now, so it's really special."

The 21-year-old McColgan, who won the 3000m steeplechase at the same event, follows in the footsteps of her mother, Liz, the former 10,000m world champion who won silver at the 1988 Games in Seoul.

Child, 25, qualified for the team after a second-place finish at the Aviva 2012 Trials in Birmingham, a stumble at the final hurdle allowing English rival Perri Shakes-Drayton to win.

McConnell also had not achieved the 'A' standard in the individual 400m but was delighted to be one of Van Commenee's three discretionary picks.

"I was always confident about the relay place but was pleasantly surprised to get the pick for the individual," said the 33-year-old.

"To go to one Olympics is very special, but with this one being in London, I just didn't want to miss out on it."

There was disappointment for Steph Twell, who competed in the 1500m at the Beijing Olympics, who missed out after being unable to run in Helsinki and was discounted for selection on fitness grounds.

Freya Murray could yet land a slot in the marathon, with the Scot unofficially on stand-by in case of an injury to the three British picks in that event.

As expected, there were no Scottish men in the Team GB squad.