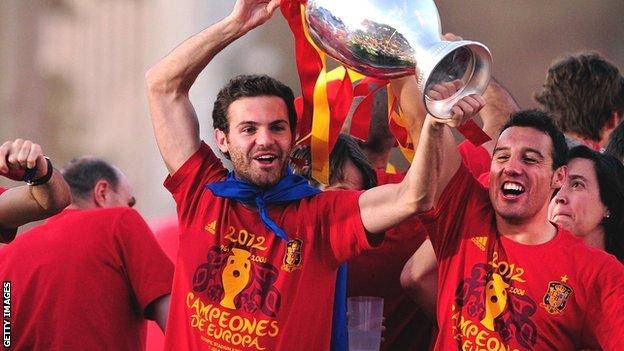 Spain have selected Euro 2012 winners Juan Mata, Jordi Alba and Javi Martinez in their 22-man squad for this summer's Olympic Games in London.

Coach Luis Milla will reduce his squad to 18 players before the Games.

This process has already begun, with Barca midfielder Thiago Alcantara having to withdraw because of a leg injury he picked up in the Copa del Rey final victory over Athletic Bilbao in May.

In a statement, Barcelona said doctors have determined that Thiago needs several more weeks to fully recover, ruling him out of the Olympics that start 27 July.

Mata, 24, and Bilbao midfielder Martinez, 23, are both over-age picks in Milla's squad, along with Atletico Madrid's 24-year-old forward Adrian Lopez.

World champions Spain became the first side to retain the European title with victory in Kiev, and in the process made history by winning three successive major tournaments.

Milla named his squad the day after Mata, Alba and Martinez were involved in a huge homecoming celebration as the Spanish team paraded the Henri Delaunay trophy through the streets of Madrid.

"I believe it would be unfair to demand that this team be at the same level as the full national team," said Milla.

"This team has character and a similar playing philosophy but it is a different team under different pressures."

The Olympic squad will join up on Friday and will face Senegal (13 July) and Mexico (18 July) in friendlies before heading to London for the Games, where they have been drawn in Group D along with Japan, Honduras and Morocco.

Switzerland have also named a number of senior internationals for the Olympics.

However, forward Xherdan Shaqiri was left out after Switzerland agreed with Bayern Munich, who the player joined this summer from Basel, not to select the 20-year-old.

Switzerland are in Group B and will face Mexico, South Korea and Gabon.