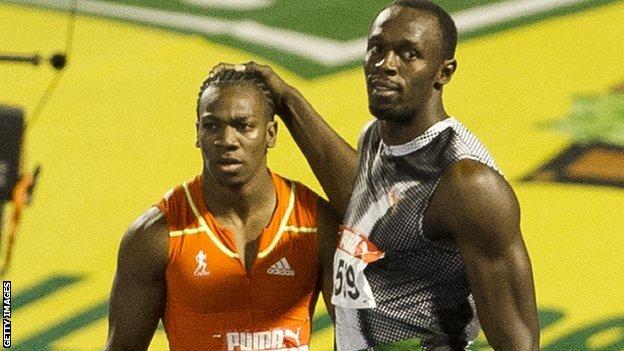 Only Adam Gemili has achieved the elite 100m 'A' time for GB, while the women's 4x100m relay team did not qualify.

"We just have to embrace the fact that at this moment in time sprinting isn't a strength for us," he told BBC Sport.

"We have waves. Sometimes the waves go in our favour in certain events and sometimes they go against us and move into other events.

"Sprinting was pretty dominant when we had Linford Christie, John Regis and Roger Black. Now it seems to have moved across to middle-distance and long-distance running.

"What we have got to hope is that people like Usain Bolt and Tyson Gay are role models across the globe.

"If they can inspire our boys to work a little bit harder and be better sprinters, then it will work out wonderfully well for us."

Jackson was also part of that "dominant era" as he won two gold medals in the World Championships in the 110m hurdles and a silver medal at the Seoul 1988 Olympics.

If you go back many years, the best sprinters always seem to have that Jamaican connection

As ever, the 100m is likely to generate the most headlines this summer.

Gemili is the only Briton to have qualified outright, while the Jamaican trials ended in surprise as the world's fastest man Usain Bolt was beaten twice - in the 100m and 200m - by running partner Yohan Blake.

"I'm not sure if it is really such a big shock really," added Jackson.

"We have all known that Usain has been struggling with his start this season, but he's still gone under 9.8 seconds and he's still got the capabilities of going under 9.7 seconds, which no-one else in the field except for Tyson Gay has achieved in their lives. So, for me, Usain will still be the man to beat.

"If any of the Brits get through to the [100m] final then they will have done phenomenally well.

"There are great sprinters in Trinidad and in the Bahamas. Of course the United States will have strong sprinters so when you put British sprinting into [the context of] world sprinting it really doesn't feature in any shape or form."

Who is Colin Jackson?

All eight Jamaicans in the final of the 100m qualifying trials ran the Olympic 'A' standard as the country continues its tradition of producing talented sprinters, something which comes as no surprise to Jackson.

"If you go back many years, the best sprinters always seem to have that Jamaican connection.