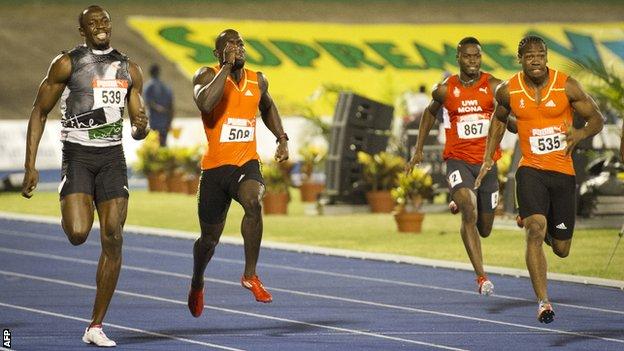 Usain Bolt was beaten by Yohan Blake in the 200m final at the Jamaican Olympic trials - the world record holder's second loss to his rival in 48 hours.

Blake stunned Bolt in Friday's 100m final and repeated the feat over the longer distance, finishing in 19.80 seconds, 0.03secs ahead.

OK, this is getting serious for Bolt. Something is not right and he hasn't got long to fix it.

Speculation and rumour after the race was rife. Had Bolt been injured in his car accident just weeks ago and he was keeping any problem quiet? Had he been travelling too much this season? Maybe his focus had gone after the 100m defeat in Kingston?

One thing that is certain is that Yohan Blake is the real deal. To chase Bolt down in the 200m is unheard of. He did it.

After the race, I asked whether Bolt felt he has something to prove at London 2012 now. "Definitely," he said.

World 100m champion Blake burst past his training partner on the straight for the victory.

"I'll have to figure out what I did wrong and work on it," said Bolt.

"I'm the Olympic champion, I have to show the world that I'm the best - so I expect to come back," he said.

"Three more weeks should be enough to get myself back into shape."

They are the fastest two men of all time over the distance and their battles are set to be one of the highlights of the London Games.

His coach, Glen Mills, said he was confident Bolt would be at his peak again in time for the Olympics, which begin later this month.

"Usain has the experience, the ability, he has been there already," said Mills. "He might be a little off at the moment, but I'm sure when the time of delivery comes around, he'll be on top of his game."

Blake had only words of thanks for Bolt.

"He always gives me a lot of encouragement and tells me to keep coming to this race," said Blake.

"A lot of people gave me encouragement, said 'Yohan Blake, you can do it'. I just wanted to keep performing and keep going."

She will be joined in the squad for London by Sherone Simpson and two-time defending Olympic champion Veronica Campbell-Brown.