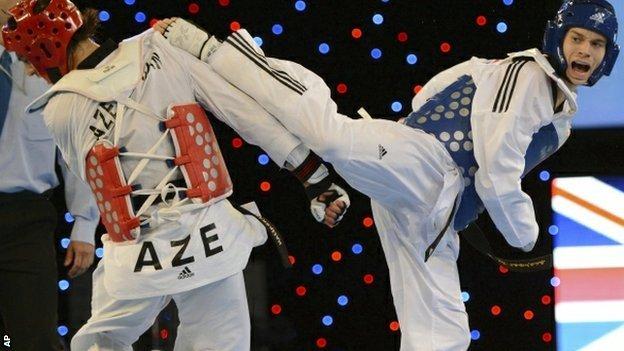 Aaron Cook has abandoned his fight to be selected for the Team GB taekwondo squad at the Olympics.

The world number one, 21, had planned to appeal after Lutalo Muhammad was chosen instead for the -80kg category.

But Cook has given up on the High Court challenge and declined the offer of being first reserve for the Games.

"Leaving aside emotion and the rights and wrongs, selection policy must be more objective. Athletes have to be absolutely clear what the selection criteria are, and have the opportunity to obtain clarification when excluded.

"Governing bodies who are recipients of public funding have a responsibility to act transparently, and be prepared to explain themselves. UK Sport is promising tighter controls on sports governance and, in the future, some funding for individual sports will depend on standards being met."

"The financial implications for me, and, more importantly, for my parents, of doing so are too prohibitive," he said in a statement.

Cook, from Dorchester in Dorset, broke down in tears when he learned of his omission from the London Games.

In a statement on Friday, he said it would be "hugely difficult" to work with Team GB coaches after the controversy.

"I wish all of the athletes the very best of luck - that includes Lutalo Muhammad," he said.

"I love my country. I love my sport. I don't think that I could have done any more in terms of my performance. I will sit down with my team though and consider my best way forward in the coming months.

"The Olympics, and especially a home Olympics, would have been the pinnacle of my career. I feel totally devastated."

His team say they have evidence which supports their view that GB Taekwondo was planning to overlook him for Olympic selection as early as August 2011.

He quit the GB academy programme two months earlier, but officials have denied the Olympic selection was pre-determined.

The British Olympic Association (BOA) declined to meet Cook's legal team to discuss the omission at the Court of Arbitration for Sport.

"I am really disappointed that the BOA did not agree to my case being heard at the Court of Arbitration for Sport. It is the specialist forum for sports-related matters," he said.

"The High Court is significantly more expensive, time-consuming and does not have the experience or expertise in dealing with sports-related disputes."

The World Taekwondo Federation (WTF) is currently conducting an investigation into GB Taekwondo's selection procedure, but Cook said the results would not be known before the Olympics.

"It has already publicly stated that the selection process has brought the sport into disrepute due to a perceived lack of transparency," said Cook.

"I welcome this investigation but I am hugely disappointed that the WTF has now indicated that it will not finalise the review and findings in time for London 2012. This is particularly disappointing as the BOA had reserved the right to reconsider its decision to ratify Great Britain Taekwondo's nomination in light of the WTF's findings."

Cook called for the introduction of a new worldwide automatic selection criteria, which would guarantee the top 10 in the world in each weight category a place at future Olympics and World Championships.

Why GB Taekwondo says it chose Muhammad over Cook

GB Taekwondo has said it believes Muhammad's fighting style to be more tactically beneficial for London 2012, with a greater ability to score and concedes fewer head kicks than Cook.

In a statement reacting to Cook dropping his appeal, it said: "This has been a difficult and unsettling period for both athletes concerned, as well as for the GB team as whole.

"However, Aaron is a world-class athlete who still has a very bright future in the sport and we would hope that he continues to be available to represent Great Britain in the future.

"With just four weeks before the opening ceremony, the focus must now be to ensure that the Great Britain team has the best prepared athletes at London 2012."

But Jamie Cunningham, chief executive officer of the Professional Sports Group which represents Cook, said: "I am sure that the complete story will emerge in time.

"Many individuals within the sport of taekwondo know the true story but ultimately could not speak out for fear of damaging their own careers."