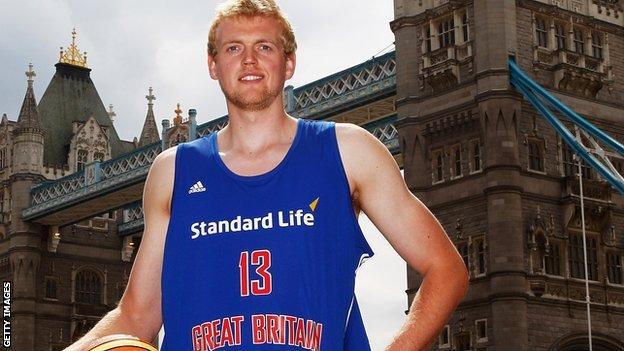 Great Britain were beaten by Russia 76-54 in their fourth warm-up game at their training camp in Texas, their fourth defeat in a row.

"We had a great first half. I think we just lost our legs in the second half," Freeland told BBC Sport.

"I think that's down to a bit of fatigue, early days in the training camp. I think, going on, we're going to get a lot better.''

Russia are former European champions and ranked 11th in the world but it was GB who started start strongly, with Freeland and Clark combining for 13 points as they took a three-point lead.

The first half was very tough and I think it shows the potential of the Great Britain team. They can play basketball, good quality basketball

Russia, playing all their stars, had a poor first half. Former NBA star Andrei Kirilenko's shooting was off target as he threw up two airballs, and the rest of his side struggled to find their rhythm.

Russia came out in the second half much sharper and quicker than GB and went on a 9-0 run inspired by Kirilenko and Denver Nuggets centre Timofey Mozgov.

GB were limited to just 13 points in the third as they struggled to find alternative scoring options to Freeland and Clark. Besiktas forward Pops Mensah-Bonsu played his first 10 minutes for GB but looked short of game-practice, shooting only one of five field goals.

Britain coach Chris Finch started with guards Mike Lenzley and Nate Reinking but also gave time on court to Ogo Adegboye, Andrew Lawrence and Kyle Johnson, none of whom found their range. In all, the five guards added just 12 points with Lawrence failing to score and racking up four turnovers.

GB are still waiting for Charlotte-bound NBA guard Ben Gordon to turn up at camp but time is running out for him to meet the 30 June deadline.

Russia cruised through the fourth quarter to record their second win over GB as they prepare for the Olympic qualifying tournament which starts next month.

Their top scorer Kirilenko, who knocked down 16 points, told BBC Sport that GB's first-half performance should encourage them - especially as they are playing all the games in the USA without their NBA star Luol Deng.

''The first half was very tough and I think it shows the potential of the Great Britain team. They can play basketball, good quality basketball,'' said the CSKA Moscow forward.