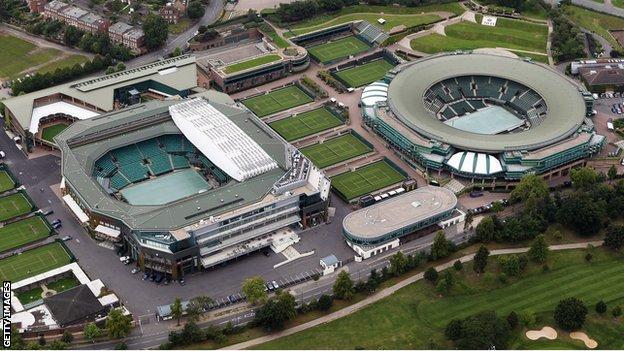 The All-England Club's famous venue in south-west London will be hosting an Olympic tournament for the first time.

Tennis was not part of the Olympic programme in 1948, while at the 1908 Games the competition was held at Wimbledon's old site in Worple Road.

Hosting a major Grand Slam tournament every year made Wimbledon the obvious choice for tennis at London 2012.

The biggest challenge is getting the grass courts back to pristine condition just 20 days after the conclusion of the Grand Slam event.

Wimbledon's ground staff have spent the last two years preparing for the quick turnaround and are confident that 100 percent perennial ryegrass - of which they use about nine tonnes a year - will do the trick.

Only 12 of Wimbledon's 19 grass courts will be used for the Olympic tournament, meaning the venue's capacity will be reduced to 26,000.

The most famous of those courts is Centre Court, which has seen many changes since it was built in 1922.

Its new roof - first used for a women's fourth round match between Dinara Safina and Amelie Mauresmo in 2009 - will ensure that play continues whatever the weather.

Wimbledon will continue to host its annual Grand Slam tournament; next year's Championships will be the 127th.