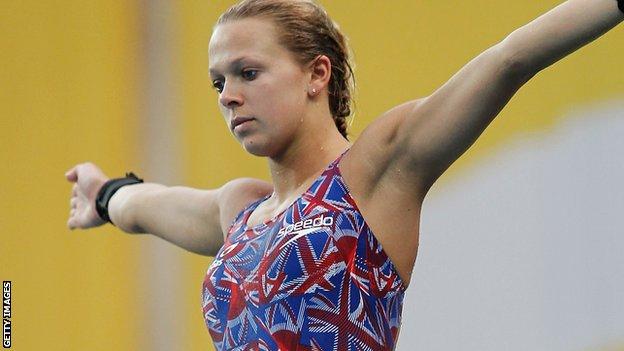 Tonia Couch has lost her appeal against the decision not to pick her for the 10m individual diving at London 2012.

The 23-year-old will still dive in the 10m synchro pairs with Sarah Barrow, but Monique Gladding will join Stacie Powell in the individual event.

Couch finished second in the Olympic trials while Gladding was third, but Team GB selectors want Couch to concentrate on the pairs with Barrow.

Coach Andy Banks said it was unlikely there would be a further appeal.

Plymouth-based Couch and her legal team brought the appeal as they felt that she was the best placed British diver to join Powell in the squad.

Selection rules stated that GB diving performance director Alexei Evangulov could use his discretion to pick a second diver behind the winner of the British trials.

"The committee said that he [Evangulov] had the discretion to do what he's done," Banks told BBC Sport.

Banks had considered taking the appeal to the Court of Arbitration for Sport, in Switzerland, if it failed, but he said that is now unlikely.

"We fought it, we disagree with it, but it's gone and for the good of Tonia and the team it's best to accept it and move on to the Olympics.

"While we're sure Tonia will initially be disappointed we will be giving her all the support she needs along with the rest of the diving team to ensure they deliver the best possible results in London.

Sad to hear about @toniacouch appeal not going through but she will do awesome in synchro with @SarahBarrow anyway! ‪#teamtonia‬ :)

"We wish Tonia and the whole team the very best of luck as they prepare for a home Olympic Games."

Couch reached the final of the 10m individual and synchro pairs at the 2008 Olympics in Beijing, where she finished eighth in both events.

Earlier this year she won European Championship gold in the pairs with Barrow, the first female British gold medal at a European Diving Championships for 74 years.

Individually Couch finished ninth at last year's World Championships and eighth in 2009, as well as finishing eighth at the 2010 Commonwealth Games.