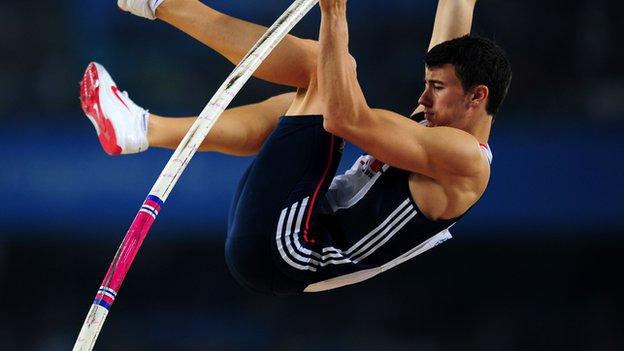 Pole vaulter Steven Lewis is relieved to have made Great Britain's Olympic team - to ensure his friends and family did not waste their money on tickets.

"It was such a good feeling," Lewis told BBC Radio Stoke. "A sense of relief for all my family and friends. We're all in it together now.

"They'd been joking with me, saying 'We've spent all this money on tickets. You'd better make it'.

"But now they can all come and support me, just like they'd planned."

Lewis, 26, a bronze medalist at the 2006 Commonwealth Games in Melbourne before winning silver four years later in Delhi, was in the British team for the Beijing Games in 2008.

The Stoke athlete booked his second Olympics appearance by winning the national title at Birmingham's Alexander Stadium last weekend - and insists there will be no prouder athlete in Team GB.

"You can't explain how lucky you feel as athletes to get the chance to perform at an Oympic Games in your home country," added Lewis. "It's such a massive privilege.

"The selectors are looking for consistency and it's all part of a gradual process.

"I feel like everything's coming into place and I'm in a great spot right now. Hopefully this will be my year."

Despite his excitement at appearing in London, Lewis will not take part in the opening ceremony on 25 July.

Instead, he will be holed up with the rest of the athletics squad at the British training camp on the Algarve, waiting for the track and field events to start nine days later.

"We'll be in our preparation camp in Monte Gordo in Portugal," Lewis added.

"We did it that way in China. We were all sat in Macau watching on TV. And it will be the same this time. We need to prepare sensibly."