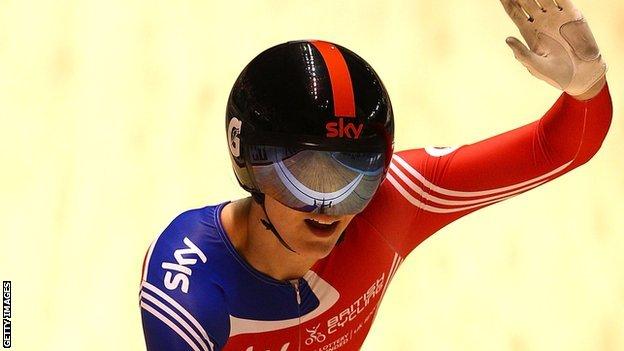 Victoria Pendleton said she intends to step away from track cycling altogether when she retires after London 2012.

The nine-time world champion, who is Great Britain's most decorated female track cyclist, will be looking to add three more Olympic golds to the one she collected in Beijing.

"I'd like to work in sport, but maybe not elite sport and cycling. I'm not ready to go back and stand trackside."

Bedfordshire-born Pendleton is set to compete in her third Games, but admitted that she did not have the "mental or physical will" to go for a fourth.

She added that she was in awe of the achievements of rower Sir Steve Redgrave, who competed at five Olympics, and sailor Ben Ainslie, 35, who will be taking part in his fifth Games.

"I've been at the top of my sport for 10 years - I've had a long time to enjoy it," continued the Mildenhall club cyclist, who will take part in the individual sprint, team spirint and keirin in London.

"I have huge admiration for Redgrave and Ainslie. The four-year Olympic cycle is a long time for an athlete to put the mind and body through stress.

"I could carry on for another four years, but it would not be my first choice. I would not want to do something that would make me unhappy."

No-one will begrudge me of having a normal life

Pendleton is planning to marry sports scientist Scott Gardner after the Olympics. They met when Gardner worked with British Cycling in the lead-up and during Beijing 2008.

"My sister just had baby so I'm 'Auntie Vicky'," she added.

"Things like that make me a little envious of her life. I'd like to do normal things and settle down - maybe have a family. I don't want to leave it too late."

A philosophical Pendleton said whether she succeeds or not in her final Olympics, she was content with what she had already achieved in her career.

"I never ever thought I'd be world champion or good enough to make national team," continued the former Northumbria University student.

"I wrote on my Ucas [university application] form that I hoped to represent Great Britain. I've achieved way more than that - I've won nine world titles, Olympic and Commonwealth gold.

"London feels like the right place to say 'thank you very much'. No-one will begrudge me of having a normal life."