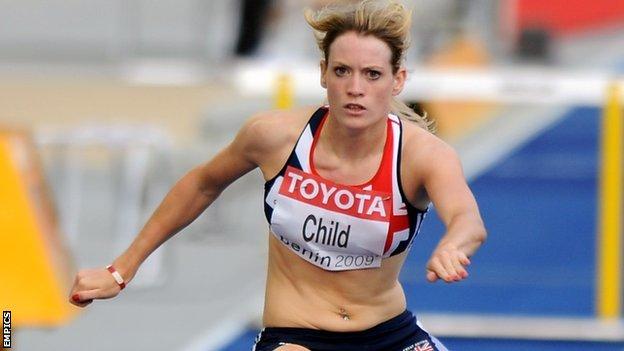 Scottish 400m hurdler Elidh Child has qualified for the GB Olympic team after a second-place finish at the Aviva 2012 Trials in Birmingham.

Child had led until a stumble at the final hurdle allowed English rival Perri Shakes-Drayton to win.

Eilish McColgan also made Team GB after victory in the 3000m steeplechase with a time of nine minutes 56.90 secs.

"I'm just going to rest up now and wrap myself up in cotton wool," a delighted McColgan, 21, told BBC Sport.

Hammer thrower Mark Dry finished second with a distance of 74.32m behind Alex Smith, although neither have made Olympic qualification standard.

On Saturday, Lynsey Sharp gave her chances of Olympic selection a huge boost by winning the 800m final.

The 21-year-old law graduate held off Jemma Simpson and Jessica Judd but her time of two minutes, 01.72secs was some way off the required 'A' standard.

If she can run 1:59.90 at next week's European Championships in Finland her place in London will be ensured.

Three Team GB places are available for the women's 800m.

Marilyn Okoro and Emma Jackson, the two runners with the 'A' standard, finished fifth and seventh, respectively, with the latter revealing she had raced with a broken rib.

Sharp, along with Simpson, has the 'B' standard only but could have done enough to be given a discretionary place if she cannot reach the qualifying time.

Lee McConnell came third behind Christine Ohuruogu and Shana Cox in the 400m, who are both assured of London places.

The 33-year-old from Glasgow will be part of the relay squad but must wait to discover if she is selected for the individual event.

Three other Scots claimed third places - Emily Stewart in the 3000m steeplechase, Kirsty Law in the discus and Chris O'Hare in the 1500m.

Scotland's Steph Twell pulled out of the trials and is a doubt for Helsinki with a foot injury.

The 22-year-old has been targetting the 1500m and 5000m in London and already has the qualifying time in the latter event.