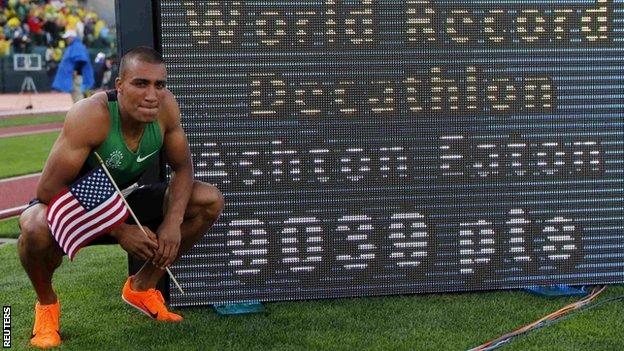 Ashton Eaton set a new decathlon world record as he eased to victory at the United States Olympic trials.

Allyson Felix's participation in the 100m at London 2012 hangs in the balance after she dead-heated with Jeneba Tarmoh for third spot in Oregon.

Tyson Gay was second fastest behind Justin Gatlin in the men's 100m heats.

Gatlin, who missed the 2008 Olympics due to a doping ban, recorded a time of 9.90 seconds.

Gay, on the comeback trail following a hip injury that has sidelined him for most of the previous year, clocked 10.00 secs at Hayward Field, Eugene.

It was Eaton who stole the limelight, however, as he laid down a marker ahead of the Games with a scintillating display to eclipse the total set by the Czech Republic's Sebrle 11 years ago.

Eaton, 24, said: "It's like living an entire lifetime in two days. It doesn't mean that much to the rest of the world, but to me it's my whole world."

There was disappointment for Beijing gold medallist Bryan Clay, though, who fell during the hurdles and eventually finished 12th after also struggling in the discus.

Felix, meanwhile, faces a nervous wait to discover whether she will be lining up in London in the individual 100m.

Tarmoh had initially been declared third by one-thousandth of a second but officials consulted camera replays and changed the result to a dead heat, leaving USA Track and Field unsure as to how they are going to determine who should take the last spot.

The race was won by Carmelita Jeter, with Tianna Madison finishing second to also secure her Olympics place.

Reigning Olympic champion Dawn Harper and Lolo Jones, who led at the Beijing final before stumbling over the penultimate hurdle, qualified for London in the 100m hurdles, as did the fastest American in the even this year, Kellie Wells.