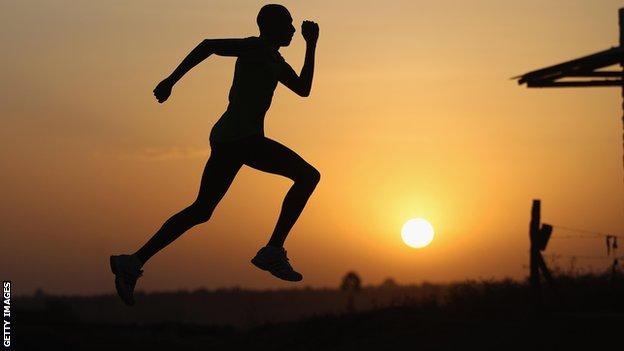 They emerge from the shadows; silently, determinedly, stretching their limbs as they go.

It is not yet 6am, but already the paths around Iten are filled with the silhouettes of runners, beginning their early morning training session.

Some jog to a series of meeting points, from where they set off in small clusters, while others start and end their training alone.

But whether they are running solo or in groups, their footsteps form part of the general dawn chorus of several hundred pairs of running shoes on gravel.

This small town, perched on an escarpment high above Kenya's Rift Valley is consumed by the sport of long distance running.

When they introduce themselves, many of the runners don't just tell you their names, they state their personal best times too.

In a town where an estimated quarter of the population runs seriously, your time is your calling card.

And, if those times are quick enough, international success and escape from rural Kenya's high levels of unemployment and poverty beckon.

There's certainly no lack of confidence among the runners we met.

Every single one of them said they believed they would make a good living from their running ability.

And there is plenty of inspiration around. Whichever route they choose to follow on their morning run, Iten's aspiring athletes can see for themselves the concrete benefits of fame and fortune.

Many of the World and Olympic champions who are from the region, or have chosen to train there, have built impressive homes.

So many, in fact, that Lorna Kiplagat, the founder of Iten's High Altitude Training Centre, which attracts international athletes, such as British stars Mo Farah and Paula Radcliffe, told me they were considering the local equivalent of a Hollywood star map.

Instead of mansions belonging to movie stars and singers, the Iten version would feature houses owned by the country's champion long distance runners.

But a star map does not equate to a Hollywood-style star system. In Iten, world champions train alongside the youngsters hoping to follow in their footsteps, whether they are pounding the roads, or using the town's basic cinder running track, which is frequently flooded and unusable during the rainy season.

It is a way of keeping their feet on the ground - a reminder that their success could be fleeting, if they ease up on their training. And therein lies both the inspirational and frustrating side of Iten's high concentration of talent.

For every London Marathon winner (and this year's men's champion, Wilson Kipsang, was among those training on the day we paid a visit to the track) there are dozens of outstanding runners, who would make the grade in nearly every other country, except Kenya.

As one coach told me sadly, for all their toil and talent, many of them will never earn a single dollar from their running.

And there can be an extraordinary amount of pressure on those who do show early signs of prowess. We saw a vivid example of that when we travelled about 10 miles out of Iten, along bumpy country roads, to meet 12-year-old Nancy Jeepcho.

Hers has been a tough life. Nancy's mother was not married when she gave birth to her, so - as local custom dictated - she was sent away from the village to live elsewhere.

Nancy has been brought up by her increasingly infirm grandmother, in a small house with a corrugated iron roof. She has to run several miles to the local well every morning, just to gather the water they need for their daily existence.

But that daily 5am run, which is followed by another barefoot jog to school, has helped Nancy develop her natural talent, to the point where she has won gold medals at the national primary school championships.

By scaling those heights, she has clearly raised expectations.

When we visited Nancy and her grandmother, a crowd of excited villagers had gathered in their back yard. For them, our arrival was yet another sign that the local girl was sprinkled with stardust.

Her teacher and coach, Flora Cherotich Tanui, was very open about how important it was for the whole community that Nancy realised her potential.

"She has to be a successful runner, so she can return to the village and eradicate poverty," Flora says.

Great expectations, indeed. But while Nancy is shy, she seems unfazed, obligingly showing us the details of her training schedule, with its dance-like leg shaking warm up routine.

And before long she was haring off along the muddy, rutted lanes, a small, swift figure in an orange shirt and blue skirt; the look of determination on her face matched by the expressions of hope on the faces of the watching villagers.