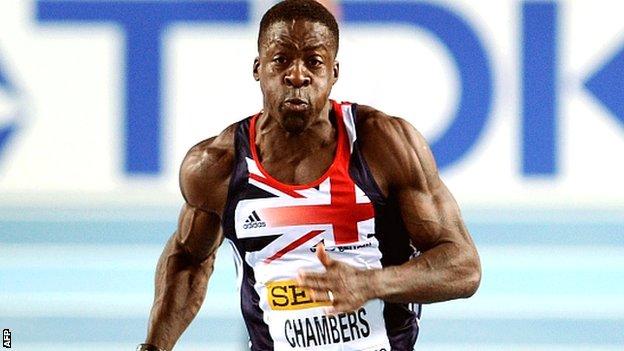 Dwain Chambers joins a host of leading British athletes hoping to secure Olympic qualification at the UK trials in Birmingham, which begin on Friday.

The top two in each event qualify if they reach the A standard and Chambers, who had a life ban rescinded in April, needs to run 10.18 seconds in the 100m.

Ennis will compete in the high jump and 100m hurdles on Saturday, and long jump and 200m on Sunday, in her final competitive action before this summer's Games.

The trials will open at 1700 BST on Friday with the men's 100m heats, where Chambers - whose best time in the Olympic qualifying period is 10.28 secs - will start his campaign to win selection.

He will be up against the likes of Harry Aikines-Aryeetey, Tyrone Edgar, Mark Lewis-Francis, Christian Malcolm and the only two athletes to have attained the A standard so far - 18-year-old Adam Gemili and James Dasaolu.

To win automatic Olympic selection at the GB trials, an athlete needs to both finish in the top two in their event and hold the 'A' qualifying standard. Dwain Chambers' fastest 100m in the qualifying period (since 1 April this year) is 10.28 seconds, 1/10 of a second outside that 'A' standard, so a win in 10.19 secs or more would not be enough. At the moment, only Adam Gemili (10.08) and James Dasaolu (10.18) have the 'A' standard. If either finishes in the top two they will automatically be offered selection. But there is wriggle room. If no other athlete with the 'A' standard qualifies, the selectors can take one athlete with the 'B' standard of 10.24 secs. And athletes also have until 1 July to run a qualifying time, so Dwain - and others - have time, if not times, on their side.

"Dwain is a quality athlete and I expect him to bring his best come the day of the trials," said 24-year-old Dasaolu, who has suffered a series of injury problems ranging from a foot stress fracture to torn hamstrings.

"No-one is to be under-estimated at all. Adam is very talented and he has run 10.08 so all eyes will be on him and how he can perform against the senior athletes.

"Everyone knows this is their moment to shine because it is a big thing to make the GB team."

Also in action in heats on Friday will be Greene, Farah and Christine Ohuruogu.

"It's very important I carry on doing well. It gives me good confidence that if I can compete with these guys and get a good win over 1500m, you know when it comes to the longer distance you've got that speed and endurance."

Greene, who has had a slow start to the season after undergoing knee surgery during the winter, will take on training partner Jack Green amongst others in the 400m hurdles, with the final scheduled for 1713 BST on Saturday.

If you don't dream big, you're not going to get the gold. I might be understated but I'm definitely dreaming big

Ohuruogu, who won Olympic gold in Beijing four years ago, starts her campaign in the 400m heats on Friday. "I've had a couple of difficult years so it was mainly to focus on getting myself back on track," she told BBC Radio 5 live's London Calling.

"In '08 it wasn't that I felt I was in contention, I felt I had the best preparation to take me into the race; I had the view that if I prepared well I would do well, and that's the same way I am viewing this year."

Andrew Osagie has already run under the Olympic A standard qualifying time of 1:45.60 in the men's 800m.

"In athletics it's all about timing," he told 5 live. "I've probably been more well known for my injuries than anything else in the last three or four years, but luckily in the last year or 18 months the injuries have died down and the effort we've been putting in to not get injured is finally paying off."

In the men's high jump, Robbie Grabarz is fresh from following up his victory in the Diamond League meeting in Rome with another personal best of 2.36m in New York, a height that won Olympic gold in Beijing.

He told 5 live: "I like to keep myself grounded, nice and calm, keep it simple. You've got to dream big, there's no point dreaming for bronze medals or silver because that's where you'll end up. If you don't dream big, you're not going to get the gold. I might be understated but I'm definitely dreaming big.

"The high jump is just me and the bar, whatever anyone else does doesn't really matter, the challenge is for me to get over not anyone else."

One of the more controversial figures over the weekend will be long jumper Shara Proctor, who competed for Anguilla before transfering nationality to Britain in 2010.

"This is huge," she told 5 live. "I always dreamed of going to the Olympics so being here is just exceptional for me. This is the only option I had to compete for the Olympics so I had to do what's best for me."

Commonwealth Games gold medallist Turner has a fight on his hands to secure his place in the final event on Sunday, the 110m hurdles, where youngsters Lawrence Clarke and Andy Pozzi are pushing him and Will Sharman hard.

"The young boys have really stepped up this year, it was just a matter of time," Turner told 5 live. "They've got a great coach and always had good potential.

"I've had it pretty easy in Britain and been relatively unchallenged so it's good for me, good for them. I just hope I do well and make the team."