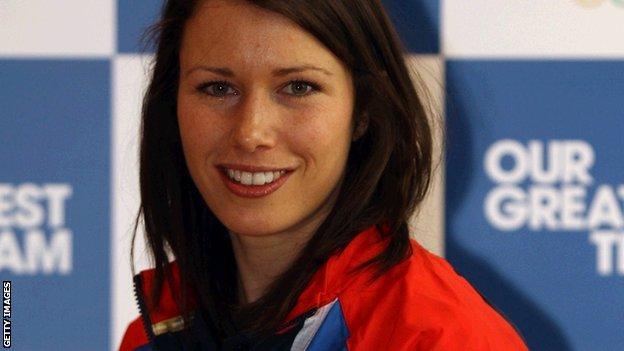 A top British hockey player has walked away from a serious car crash just one month from her home Olympic Games.

Anne Panter, 28, flipped her car after a tyre blew on Berkshire's A404 while driving home from training last week.

She revealed to BBC Sport: "I went off the road into the trees, hit the trees and flipped two or three times before landing back out on the inside lane.

"I was fine. I was fairly shaken up, but I had no injuries. Lucky doesn't even describe it, really."

'You have a lot of time to think'

Anne Panter remembers the thoughts that went through her head during the crash:

"It's funny, you have a lot of time to think. I was definitely conscious throughout and it went in slow motion.

"When the car's losing control, you're thinking a few expletives and about trying to control the car. Once it hit the trees and started going upside down, I was still scared but there was calm - I can't do anything, whatever's going to happen will happen.

"As I went upside down, I had the thought in my head: 'This is how it feels to be upside-down in a car that's rolling.'

"And I had another thought: it would all be slightly ironic, given my injuries started off with a car crash and then I had a big comeback, to then end it with a big car crash. But I was fine."

This is the second major car accident involving the Northamptonshire star, who has been picked to play in her second Olympic Games this summer.

The first, in 2003, kept her out of the sport for two years and set in motion a train of events which saw her career blighted by injury for eight years.

"After that, in training, someone hooked their stick around my ankle. I ruptured a ligament and that was the onset of a lot of ongoing knee injuries until the beginning of 2011, when I started playing again."

Danny Kerry, the British women's coach, told BBC Sport: "The blood runs cold most training sessions between now and the Games - your heart's in your mouth hoping nobody takes a nasty collision or gets hit with a stick or a ball.

"[But] you forget there's a life they have outside hockey that involves cars. Fortunately Anne's come out unscathed from this one.

"First, you're genuinely scared for the athlete and hoping they're OK. Then you move on to 'can they play hockey?' rather than just 'are they OK?'.

"A scan found some old ligament damage so I'd had my ankle strapped, without a problem, until the week before June's London Cup.

"My ankle had an allergic reaction to the tape, which then became infected. The whole ankle was red, swollen, itchy and hot.

"This is purely because it's 2012 and this year is testing our squad to the max. Fortunately the second lot of antibiotics worked."

"Then you start to think: 'That's twice that's happened to Anne. Maybe we have to look at her driving a bit.' You move to humour but I haven't got that far yet with Anne, I think it might not go down too well."

Panter says she suffered mild whiplash in the wake of her latest accident, which closed the A404 for a time last Wednesday, but was otherwise unharmed.

"It all feels surreal now," she said. "The police cordoned off the road and all I was concerned about was trying to find my phone - but everything from my car was everywhere on the road. We found it on the other side of the carriageway, smashed.

"One of the boys, Richard Mantell, was driving along the road back from training and ended up taking me back home.

"I haven't slept that well since. But I was back driving on Sunday - I thought it was best to get straight back on it."