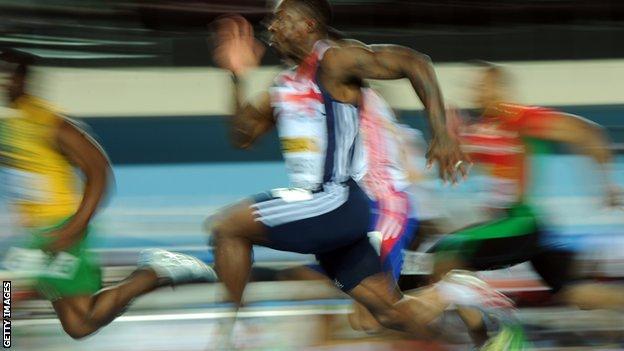 ATHLETICS - Olympic Trials and UK Championships, Birmingham (22-24 June); the GB Olympic trials feature more than 750 of Britain's best athletes hoping to secure a place at London 2012. A top-two place guarantees selection, provided the Olympic 'A' standard has been achieved. Of particular interest is the men's 100m, which Dwain Chambers is calling "the biggest race of my life". Live coverage on BBC Two and BBC Radio Five Live.

ARCHERY - World Cup Stage 3, Ogden, USA (18-24 June); the third and final stage of this year's World Cup ahead of September's World Cup Final in Tokyo. For those not yet qualified for London 2012 though, the main aim is to book an Olympic place. All six GB Olympians are taking part. Follow Archery GB on Twitter.

There were British victories in the women's pair, the women's double scull and the men's lightweight four at the World Cup in Munich.

But the men's four could not overhaul Australia and had to settle for silver.

And Mark Hunter and Zac Purchase - Olympic and world champions in the lightweight double - finished sixth for the second World Cup final in succession.

The Team Sky rider held the yellow jersey, with an eight-second advantage over Lars Boom, heading into the final stage, a pan-flat 163.5km course.

Cavendish maintained his lead over the Rabobank rider as he finished in the front group after a sprint finish.

"I've been second a couple of times but this is my first GC win and I'm really happy with it," said Cavendish.

His selection means that David Davies will not have the chance to improve on the Olympic open water silver medal he won in Beijing.

The 27-year-old needed a top-10 finish or to beat Fogg at a recent Fina qualifier in Portugal but he finished 38th and Fogg 35th.

However, both Davies and Fogg have already been selected for Team GB in the 1,500m freestyle.

Lizzie Neave took bronze in the women's K1 at the latest World Cup meeting in Pau.

It was a first medal of the season for Neave, who finished behind Spain's Maialen Chourrant and France's Carole Bouzidi.

After last week's historic double gold, David Florence came back down to earth when he failed to make the final of the C1 or C2.

Olympic bronze medallist Tasha Danvers has retired from athletics after conceding defeat in her battle to be fit for the London 2012 Games.

The 34-year-old, who won a bronze medal in the 400m hurdles at the 2008 Olympics in Beijing, has suffered a series of injuries.

The London-born athlete, who has been most recently sidelined by an Achilles problem, had "genuinely believed I could step onto that podium again".

"Sadly my body has had enough," she said.

Germany's reigning world and European champion Michael Jung was an impressive winner of the Luhmuhlen four-star event in Germany.

Great Britain women suffered a second-half collapse as they lost 73-54 to hosts Turkey in the final game of a pre-Olympic invitational tournament in Ankara.

But there were encouraging victories earlier in the week against Argentina and world number nine South Korea, whom they beat 113-86.

The team now head to Prague for back-to-back friendlies against the Czech Republic on Tuesday and Wednesday.