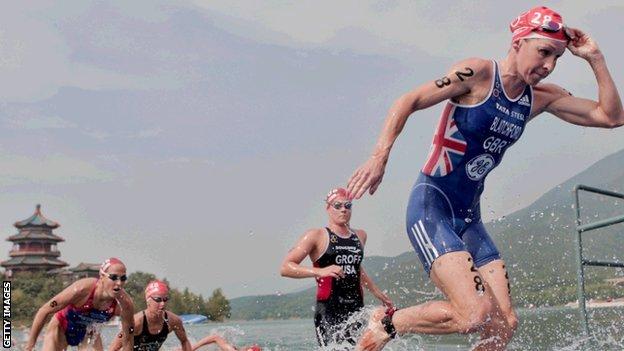 Some British triathletes are prepared to accept their only route to London 2012 may be as domestiques helping the Brownlee brothers or Helen Jenkins.

Domestiques sacrifice their own race to help others win. Jenkins and Alistair Brownlee are reigning world champions.

With three places to fill per gender, domestiques can be chosen if no others prove to be genuine medal contenders.

What do domestiques do?

"An example was when Alistair Brownlee got a puncture at the 2011 Euros. He was over a minute behind his rivals. We had athletes in that race prepared to drop off the main pack and work with Alistair to get him back. He went on to win the race. That was an extreme example but it's somebody there primarily to support."

"I've had time to consider it and I'd take that role," triathlete Liz Blatchford told BBC Sport.

"I want to be an Olympian and to help Helen win a medal would be an honour.

"First choice, I'd love to go for myself, but to get a spot in the Games - if that means helping Helen - then yeah."

A podium finish at a top-level world series triathlon race is enough to earn selection, but has not been achieved recently by anyone other than Jenkins, Alistair Brownlee and younger brother Jonny.

Jenkins and Jonny Brownlee both won gold at last week's San Diego triathlon, in the absence of Alistair, who continues to recover from an Achilles injury.

Next week's Madrid triathlon is the final selection event for the British team, which will consist of three men and three women at the London 2012 races in Hyde Park.

"We keep thinking it will become clearer, and it keeps not being," said British Triathlon's Malcolm Brown. "We have a final event in Madrid and only then will it be clear what the circumstances are. It's all to play for.

What the triathletes think

Vicky Holland: "Being a domestique is something I've increasingly had to think about. If that was my way into the Olympic Games, and I could do something to help us secure one of those medals, then yeah, I would do it."

Tim Don: "I don't know. I'm not really thinking like that. If you really believe you can go, you've got to focus on trying to have the best performance possible. It's a decision I'll have to make afterwards. I don't particularly know if Alistair and Jonathan need a domestique."

"But that may be a tough thing for an athlete to decide to do."

Will Clarke, who competed for Team GB at the Beijing 2008 Olympics, last reached a world series podium when he finished second in Hamburg in July 2011, in a race not contested by either of the Brownlee brothers.

Clarke, 27, has so far finished eighth in Sydney and 20th in San Diego this year. He said he was confident of Olympic selection until he received a phone call from British Triathlon.

"[They said they were] really looking for an athlete to get in the medal zone rather than be close to it. It made me realise it's far from over, there's a lot of work to be done and it will be really hard to qualify in my own right," he said.

"Hopefully I can do it. If not, I'll be going for a domestique role to work with the other lads.

"I think [the selection policy] is really harsh, I can't see a reason why athletes finishing eighth, 10th or higher can't be right up there on the day. Everyone knows anything can happen, people do big things on the day.

"But it's absolutely important for Britain to get a medal, all the funding is based on winning Olympic medals. I can understand why they're doing it, having someone in there who can increase the other guys' chance of getting a medal."

Jenkins, 28, said: "As an athlete, you like to think the three best people should go to the Games. But I'm very aware that our funding comes from UK Sport and their remit is medals.

"If I did have people there as support-role athletes, it puts more pressure on myself but if it helps us win medals and secure the future of our sport, that's a good thing.

"It's tough and it's emotional. If people help me I'll be grateful for all eternity that they were there for that purpose. It's a hard thing to do but it's an Olympics in your own country and most people would do anything to be there."