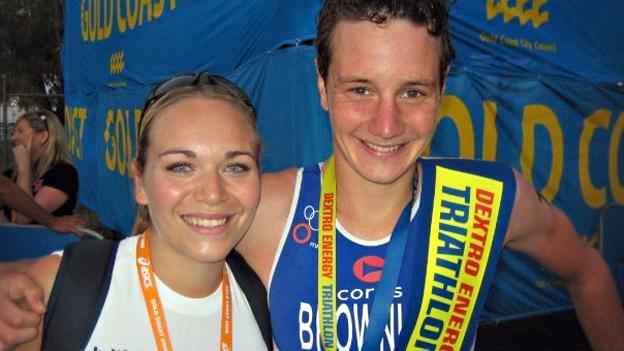 In February Britain's world triathlon champion Alistair Brownlee incurred an Achilles tendon tear. For World Olympic Dreams, Emma Deakin his physiotherapist reveals that injury at this time of year won't jeopardise Brownlee's Olympic hopes and that he could actually become a better athlete as a result.

"Whilst there's no time to waste in getting Alistair back to full fitness, thankfully his injury has not come at the worst time possible.

This is mainly due to him having the best winter's training he's ever had, after which he would have been having a bit of a break anyway. Instead, he is now working on a rehab programme.

Initially this meant Alistair was wearing a protective boot to prevent any further injury, which is now off.

With injury, you're trying to push your luck and see how quickly you can get fit. I like to think that everyone who is advising you - physios, doctors, coaches - they're playing it very safe... It's how far you push yourself, that's the massive debate you have to have with yourself every day

However, he's not actually had to stop training at any point so we've been creative in matching his rehab to his normal training load during the week.

This has also meant I've been able to focus on other things to help him return in great shape. Last time he fought back from injury he had improved his running technique, so who knows what he'll achieve this time around!

His coach, Malcolm Brown, and I discussed the most effective way of getting him running again: to gradually increase the load whilst reducing the risk of loading up his Achilles.

There were various options and he is now using an underwater treadmill - it's an impressive piece of kit that you can see in the photo. It's taken up the whole of his garden, which his housemates helped to dig up to get it in.

You can set the depth of the water which means he can gradually increase the load through his rehab.

We're working with specialists who have used the equipment for rehab before so we're ensuring the best advice is on hand for using it as part of his programme.

He's a unique athlete and because he's experienced injury before, he has been inputting into his rehab programme - which is developing really well.

As for the rest of the squad, things are progressing well and there are a busy couple of months ahead whilst the places for the Games are fought for.

The full team will be selected in early June and the Olympic triathlon races take place on the 4th and 7th of August. You don't need a ticket to watch so maybe see you there!

Emma Deakin works with the British Triathlon performance programme through her role as physiotherapist at the English Institute of Sport. She works in both Leeds and Loughborough as well as at training camps and competitions.