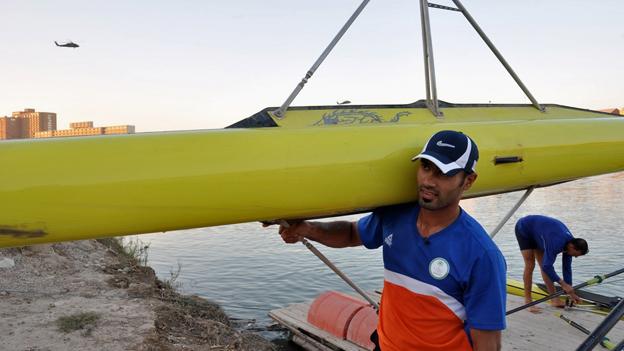 Hamza Hussein and Haider Rashid must really love rowing. I mean, I know about loving my sport - loving to the point of weird obsessive, take-over-your-life-type craziness.

But I never had to dodge rockets while we went for a training session on the Thames and there aren't too many roadblocks to weed out the suicide bombers between my house and the river.

Hamza and Haider have to put up with all this on a daily basis. The British troops are long since gone from Baghdad, American forces might well have pulled back onto their bases but the streets are still filled with armoured troop carriers.

Nervous Iraqi soldiers manning the checkpoints are always on the look out for strangers, something different, anything dangerous. Two guys heading down to the river to row are certainly different.

Down at the boathouse on the banks of the Tigris, the rules and regulations are no less strict.

Don't point your cameras at the Foreign Ministry, don't paddle the boats down into the Green Zone and don't go anywhere near the Presidential Palace.

Through all this, Hamza and Haider are pushing on and made up half of the four athletes who represented Iraq at the 2008 Olympic Games in Beijing.

"It was our first entry for Iraq in rowing at the Olympics," Haider recounts.

"We wanted to see what it was like. We knew we weren't going to really compete with the other countries but it was great - the lake, the village, the other athletes."

Hamza agrees, adding simply: "it was a great thing for Iraqi athletes and Iraqi sport."

Predictably enough, perhaps, they finished last - 13th out of 13 double sculls in the event.

But then their combination is far from ideal. Hamza, 36, is a natural lightweight rower, while Haider, 28, is much heavier at 15st.

They were giving away a lot of power to the best rowers in the world, to say nothing of the gulf in experience. They trained for a few weeks together. Their rivals had years.

The opposition would not have been forced to contend with the challenges of Baghdad either.

By 2006, the Tigris was the dumping ground for victims of sectarian violence.

HAMZA HUSSEIN ON BEING LEFT WITHOUT A PARTNER

We don't know yet what we will do. If Haider does well, it is great for rowing - even just to participate. I will never be upset.

"We came training as long as we could," says Haider. "But back then there were lots of bodies in the water.

"One was on one side of the pontoon and we were using the other side three metres away. It stayed there maybe two weeks. No-one wanted to move it."

A rocket landed on the bank during one session but training was only suspended when the gunfire began.

Haider fled to Sweden for almost a year and was only persuaded back by the improved security situation and the chance to compete in Beijing.

It has been a brilliant year for both of them.

They went to the United States to train with the Olympic team there and to race in Boston on the Charles river. They had never seen as many rowers in one place before.

Even more importantly, Haider won a bronze at the Asian Games in Guangzhou a fortnight ago. He has been back to his university studies since but life has changed.

"I got a medal at the Asian Games and my whole college said well done," he says. "All of my friends and family know. It's great. Sport unites Iraq, sport is a beautiful thing."

The result could have repercussions.

Haider's best chance for London may come in the single scull. If he finishes as one of the top six Asian scullers in 2011, he is guaranteed a place at the 2012 Olympics.

If that happens, Hamza will be left without a partner. He might be able to form a lightweight double scull but the London Games may come too quickly for the younger rowers at the club to fill Haider's place.

Hamza is still upbeat. "We don't know yet what we will do," he says. "If Haider does well, it is great for rowing - even just to participate. I will never be upset."

It is time for the last session of the day. It is past 3pm and they hurry down to the riverside to paddle.

The sun is beginning to slip below the Baghdad rooftops. It does not seem to stop the American helicopters, though. Every 10 minutes or so, a Blackhawk thunders past overhead.

Despite the interruptions on the river, it all seems to make sense.

The Tigris flows through the best and worst parts of the city without pausing. It is a perfect spot to watch to the sunset, to see the sights or to pursue your Olympic dream in peace.