GYMNASTICS - Visa International Gymnastics, O2 Arena, London (10-18 Jan); a London 2012 test event of huge importance for Great Britain's men, who are bidding for Olympic qualification after failing to finish in the top eight at October's World Championships in Tokyo. The teams who finished ninth to 16th in Japan will battle it out for four remaining team slots at the Games. Live coverage on BBC Radio 5 live sports extra plus regular updates from Ollie Williams on Twitter.

Luke Patience and Stuart Bithell have been named as Britain's men's 470 team for the 2012 Olympic sailing regatta in Portland and Weymouth.

Scotland's Patience and Rochdale's Bithell - who have been competing together since 2009 - clinched silver at last month's World Championships in Perth to effectively secure their spots.

The pair, both 25, join sailors in seven other classes who have already been selected.

That leaves just the men's 49er class and women's Laser Radial to be decided, although contenders may have to wait until May.

In Olympic sailing, a nation may only enter one boat per class, making selection highly competitive.

Kenny had finished second to Bauge at the event in Holland last March. Sir Chris Hoy is promoted from bronze to silver medallist.

France have also been stripped of the team sprint world title due to Bauge's involvement, with Germany upgraded to gold, Great Britain to silver and Australia promoted to bronze.

The French Cycling Federation suspended Bauge for a 12-month period - backdated to 23 December 2010 - as a result of one missed test in 18 months and for violating rules regarding drug testing availability.

The backdated suspension means Bauge is clear to compete at London 2012.

Britain's Andy Murray enjoyed the perfect preparation for the Australian Open by winning the Brisbane International with a comfortable victory over Ukraine's Alexandr Dolgopolov.

In his final event before the year's first Grand Slam, Murray dominated from the off to beat the third seed 6-1 6-3.

He won nine straight games from 1-1 in the first set and, although Dolgopolov rallied, easily wrapped up the title.

Murray has been seeded fourth for the Australian Open which begins on Monday, 16 January.

Ethiopia's Kenenisa Bekele, the 5,000m and 10,000m Olympic champion regarded as the biggest rival to Britain's Mo Farah at London 2012, finished 11th - the first time he has finished outside the top 10 in any race since 2001.

A 37-22 loss in Austria was followed three days later with a 40-24 defeat at Crystal Palace, which ensured they finished bottom of Pool A.

The GB team, who were only formed in 2007, won their first competitive international match in June 2010 against Bulgaria but have struggled to produce consistently high performances.

Their next big challenge will come at the four-team Olympic test event at the end of April.

Chris Adcock and Imogen Bankier enjoyed a memorable start to 2012 when they beat world champions Zhang Nan and Zhao Yunlei in the opening round of the mixed doubles at the Korean Open.

Their joy was short-lived, however, when the British pair fell 21-14 21-17 to Chinese number two pairing He Hanbin and Yixin Bao 24 hours later.

China took four of the five titles at this first Superseries event of the new season, with Lee Chong Wei of Malaysia preventing a clean sweep by beating Olympic champion Lin Dan in the men's final.

Thousands of people who bought tickets to see synchronised swimming at London 2012 have been asked to return them, after the organisers discovered that they had sold 10,000 too many. 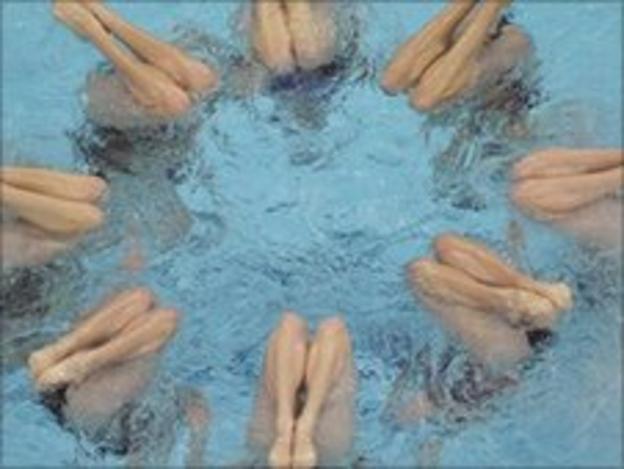 Human error is believed to be responsible for 20,000 tickets being put on sale for four of the sessions in the aquatics centre rather than 10,000.

Around 3,000 people have been contacted by Games organisers and are being offered tickets for alternative events they had applied for previously.