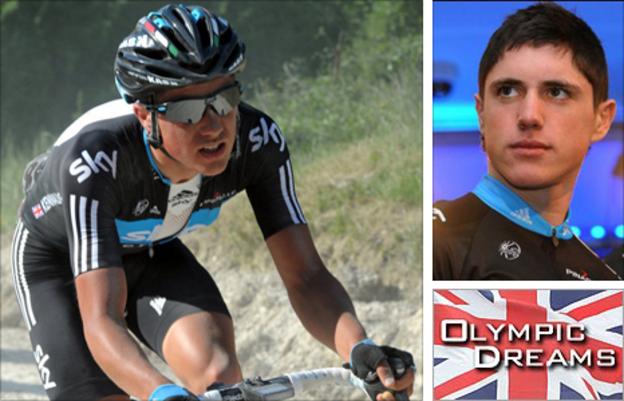 Isle of Man cyclist Peter Kennaugh is confident that the Great Britain team pursuit side has a great chance of winning gold at London 2012.

The multi-talented cyclist is at home on track and road, and could represent GB in a number of events in London.

Kennaugh, 22, told BBC Isle of Man: "The team pursuit is something I've been doing since I was 16.

"I'm passionate about the event and I think the British team will have an excellent chance of winning gold."

The Manx cyclist is currently living in Italy and competing for the British-based Team Sky cycling team.

But he admitted that although the prospect of competing with fellow GB cyclists was exciting, getting into the team would be a challenge.

"It would be very special to represent Britain at the London Games," he said. "It's still 12 months away but I am already excited at the prospect of competing in London.

"The hardest part will be getting in the team, but if I am selected it would be my ultimate dream to win gold on the track with three of my British team mates."

The GB team could also utilise Kennaugh's talents on the road, a prospect that brings with it the possibility of teaming up with friend Mark Cavendish.

"Obviously the road race would be a big deal as well, especially for Cav [Mark Cavendish]," Kennaugh continued.

"If I didn't do the track I would definitely try and get in the road team.

"That would be all about supporting Cav for the win. He's not just any other cyclist, we've grown up together and to be at the Olympics with him would be something quite special."

Kennaugh, from Douglas, started cycling competitively on a BMX at the age of six before quickly moving onto the road where he made rapid progress through the ranks.

And head of performance for cycling on the Isle of Man Gary Hinds says Kennaugh has always been an exceptional talent.

"He is strong in all aspects of cycling, it will be very interesting to see what event he is chosen for," Hinds said.

"If he is selected for the road with Cavendish it would be very special for Manx cycling."

At the age of 19, Kennaugh was selected to join Team GB's Olympic Cycling Academy and moved with the squad to live at their Italian base in Tuscany.

The following year he again won the British Madison Championships with another Manxman, Mark Christian.

His first professional contract followed with Team Sky, but shortly afterwards he fractured his left collarbone in a crash at the Strade Bianche Eroica race in Italy.

"It was very difficult time, especially as it was my first year as a pro," Kennaugh said. "It did put me behind at the time but I have come back strong and it's all behind me now.

"I'm loving being at Team Sky and working with world class cyclists like Bradley Wiggins, Geraint Thomas and Ben Swift."

The Isle of Man cyclist has had a busy 2011 so far, first winning his third British Madison title at the Manchester Velodrome before completing the three week Giro Italia, a feat he describes as the highlight of career so far.

Kennaugh is now focussed of the forthcoming Tours of Poland and Spain before turning his attention to September's Road World Championships in Copenhagen and a winter season on the track.

Peter Kennaugh is BBC Isle of Man's featured athlete as part of 'Olympic Dreams' in the build-up to London 2012.