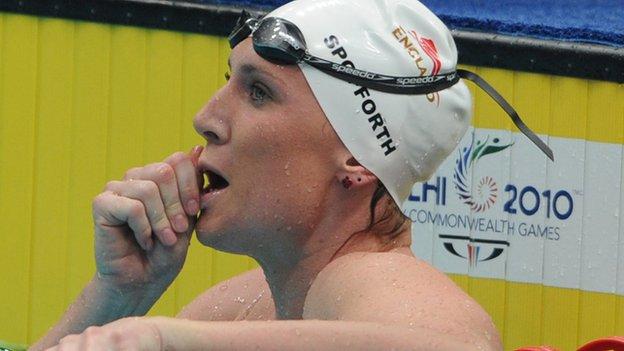 Having missed an Olympic medal in the 100m backstroke by just 0.04 seconds, the Shoreham-born swimmer made up for that disappointment in style at the 2009 World Championships - winning gold in a world record time.

She added the European title in 2010 but had to settle for three silver medals at the Commonwealth Games.

Illness hampered Spofforth's defence of her world title in 2011 as she failed to make the semi-finals. She had come into the championships on a bad run of form and admits she almost quit swimming after performing so badly in Shanghai.

After her A-levels, Spofforth made a "life-changing" move to the USA to study at the University of Florida, who offered her a swimming scholarship.

She graduated in 2010 after four successful years but she has had a lot to deal with away from the pool; her mother Lesley died of cancer eight months before the 2008 Olympics.

Spofforth used a picture of the Olympic scoreboard in Beijing - where she finished 0.04 seconds off 100m backstroke bronze - as her computer screensaver for motivation.