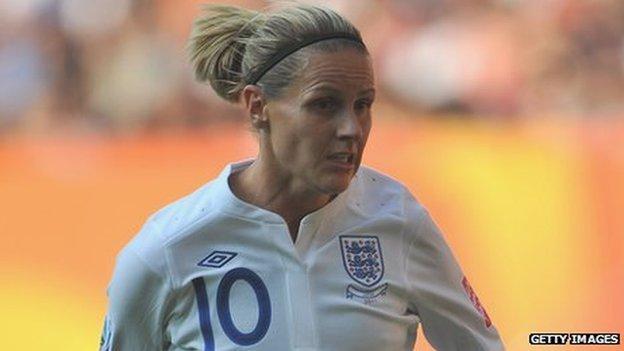 Regarded as one of the most talented players of her generation, Smith is England's record goalscorer and was third in the voting for the 2009 FIFA Women's World Player of the Year award.

She scored four goals in as many games at the 2007 World Cup and also netted three times at Euro 2009, including in the 6-2 defeat by Germany in the final. She celebrated her 100th cap in March 2011 with her 43rd international goal.

At club level, her best achievement is winning the Uefa Cup with Arsenal in 2007.

Smith returned for her third spell at Arsenal in March this year, but within weeks had aggravated a stress fracture on a video shoot to leave her Olympic hopes in doubt.

She made her England debut in 1995 before moving to the USA on a soccer scholarship aged 19.

She became the first Englishwoman to feature in America's newly-formed professional league in 2001, but injury blighted her early career with the Philadelphia Charge.

Following the collapse of the league in America in 2004, she eventually rejoined Arsenal, winning 10 major trophies before leaving in 2009 to sign for the Boston Breakers in the new American league.

Smith developed a drink problem during her injury-ruined first spell in the USA and her father brought her back to England, where she checked into rehab, getting help from Tony Adams' Sporting Chance Clinic.