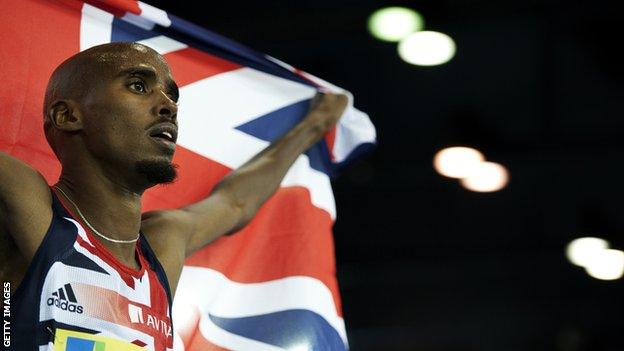 Farah's gutsy 5000m world title in 2011 underlined his emergence as a global force since moving to the USA earlier in the year to work under marathon legend Alberto Salazar.

Farah was already untouchable on the European scene, successfully defending his European indoor title in March 2011, eight months after becoming the first British man to win double gold in the 5,000 and 10,000m at the outdoor European Championships in Barcelona. He retained the 5000m title this year.

The former European cross-country champion earned his first global track medal in 2011, although his 10,000m silver medal at the World Championships was bitter-sweet after being overtaken with 50m to go by Ethiopia's Ibrahim Jeilan; redemption came a week later over 5000m.

Farah failed to make the 5000m final at the 2008 Olympics, saying that he had over-trained.

Born in Somalia, Farah spent most of his early life in Djibouti and arrived in London when he was eight to join his father.

Farah's left leg is reportedly more than one inch longer than the right, a cause of several injuries in the past.