Michael Dunlop will hope to bridge a four-year gap since his last Ulster Grand Prix win when he competes at the Dundrod road races this week.

The last of Dunlop's six successes at the event came in the 2013 Superstock race but the 15-time TT winner will be fancied to add to that tally.

"We've made changes to the Superbike to get more speed and are developing it all the time," said the Ballymoney ace.

"It's a fast, smooth and open. On a good day it's a fantastic circuit."

Since taking Supersport and Senior triumphs at the Isle of Man TT in June, Dunlop has enjoyed victories at the Southern 100 and Armoy but the Bennett's Suzuki and MD Racing pilot will face stiff opposition at Dundrod.

Lincolnshire's Peter Hickman goes into the meeting on a high after securing a win and a second place at Sunday's British Superbike round at Thruxton on board his Smith's BMW machinery.

Hickman, who occupied the top step of the podium for the first time at an international road race by winning the second Superbike race at 'the Ulster' in 2015, believes Ian Hutchinson's one-year-old lap record of 134.089mph can be surpassed.

"I definitely think we could go a lot faster. It all depends on the conditions obviously but if we can have a couple of godo days of practice and get to Saturday with some good laps under our belt then I don't see why we can't push it up to maybe 135 or 136mph," said the two-time Macau Grand Prix winner.

"It'd be great to have a lap record around a road circuit, apart from my newcomer record at the TT I've not had an outright lap record anywhere on the roads so it'd be nice to do something like that, and good to do it at the Ulster.

"I enjoy riding on the roads so much, it's so much fun, and I also enjoy the British Superbikes, and I'm fast doing both which is why I get so much excitement from both. For me it's all about riding bikes as much as possible.

"Dundrod is just an untouched, proper circuit, just as it should be. It's fast, it's flowing, it hasn't had to be adapted with chicanes to try and make it safer; it already is as safe as you can make a road race, even though it is ridiculously fast," added the 30-year-old, who achieved five podiums from five starts at this year's TT. 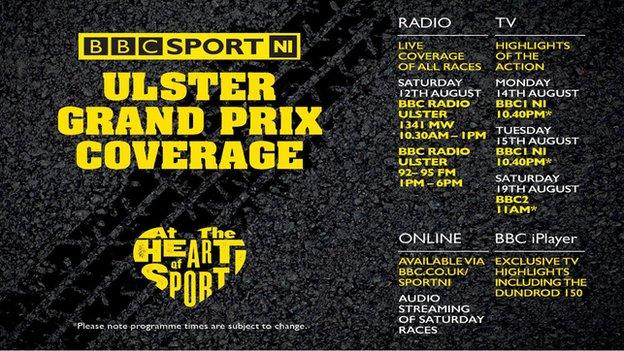 Among the other leading challengers should be Bradford rider Dean Harrison, who was crowned Southern 100 Solo Champion for the first time on his Silicone Engineering Kawasaki in July.

Bruce Anstey will hope to make up for a disappointing season so far as he goes in search of a 13th win on board his fleet of Padgett's Hondas, with another former lap record holder, Manxman Conor Cummins, his team-mate once again.

William Dunlop's best chance of victory is likely to come in the Supersport class, while Fermanagh's Lee Johnston will aim to recapture the form which saw him clinch a hat-trick in 2015 as he returns to action after a practice spill at the TT.

Dan Kneen will hope to make the most of the opportunity he has been handed to impress in the Tyco BMW outfit, with Derek Sheils, Ivan Lintin, James Cowton, Jamie Coward, Dan Cooper, Christian Elkin and Adam McLean other probable frontrunners.