Derek Sheils repeated his double of 12 months ago by winning the Feature and Open races at the Cookstown 100.

The Dubliner won the main event by 11 seconds from Derek McGee, who took an impressive five second places overall.

William Dunlop won Supersport 600cc race one, with Adam McLean taking his first win in that class in race two.

James Cowton overhauled McGee on the final lap to clinch a thrilling Supertwins triumph, with Sam Wilson taking victory in the 125cc/Moto3.

McLean completed the podium in the Supertwins, with Sweeney, Sheils and Jordan making up the top six leaderboard. 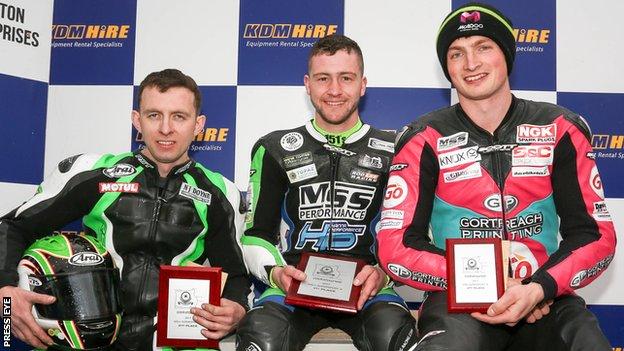 Kawasaki rider McGee was again forced to settle for second best in the Open race, with Dunlop third on the Temple Golf Club Yamaha which he will ride for the remainder of the season.

McLean saw off McGee and Cowton in the second Supersport event, while Dunlop was fourth, then Sheils, Jordan, Sweeney and Martin.

The racing was punctuated by a number of red flag incidents throughout, but none of the riders involved are thought to have been seriously injured.

Czech rider Michal Dokoupil crashed in Friday night's Supersport outing and McAdoo Racing pilot Cowton was off in the Open race without injury.