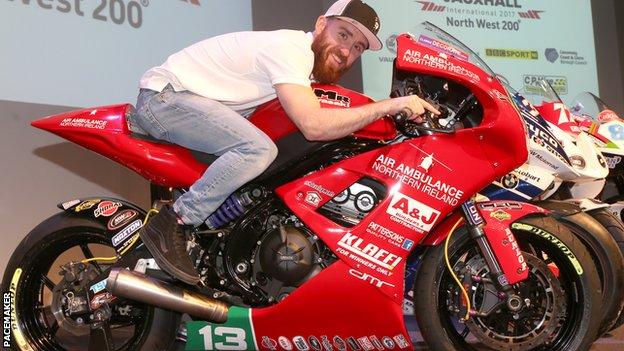 Ryan Farquhar will provide a Supertwins machine for Lee Johnston to race at this year's North West 200 in May.

Farquhar unveiled his team's new ER6 Kawasaki painted in the colours of the Northern Ireland Air Ambulance service at the launch of this year's event.

Farquhar, who was airlifted to hospital after crashing in 2016, will debut the bike at the NW, with Johnston on board.

The Superbike race will now move to the penultimate slot on Saturday ahead of the second Superstock race of the week.

The reshuffle of the programme for the main day of racing follows the abandonment of the feature event of the meeting on several occasions in recent years.

Meanwhile, record 17-times winner Alastair Seeley has confirmed that he will ride for the Tyco BMW team in the Superbike and Superstock classes at the Triangle circuit this year.

The Carrickfergus rider last rode for the Moneymore-based TAS outfit run by Hector and Philip Neill in 2015.

Seeley has 27 podiums at the meeting and will also campaign Gearlink Kawasakis in the Supersport class as he targets Phillip McCallen's all-time record of 28 rostrum finishes.

Farquhar is recovering from injuries sustained in the first Supertwins race at the North West last year and hinted in a recent interview with the BBC that he may retire from competing in the sport.

Fermanagh rider Johnston, who will compete for Jackson Racing Honda this season, was a double winner in the Supertwins class in 2014.