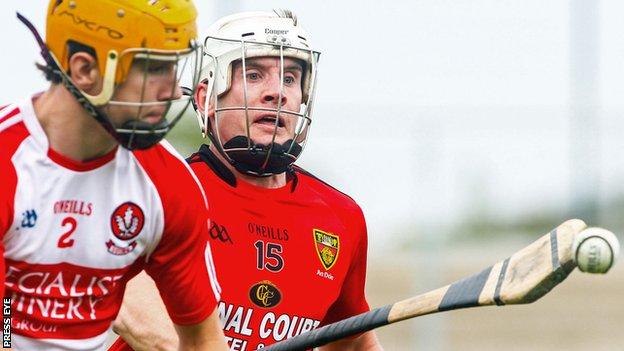 Derry have reached their first Christy Ring Cup final by beating Ulster rivals Down 0-23 to 2-12 at Owenbeg.

The Oak Leafers twice recovered from conceding goals to bombard their Ulster rivals with scores to set up a Croke Park showdown with Kerry next weekend.

The accuracy of attacking trio Paul Cleary, Ruairi Convery and Paddy Henry, who nailed a combined total of 18 points, proved the difference.

Steven Dineen sent in the long delivery that Johnson first-timed to the net in the ninth minute, but the home side produced a gutsy response, and scores from Alan Grant and Convery had them right back in it.

Fintan Conway landed a a fine effort from distance for the visitors, but Cleary brought the sides level in the 19th minute.

The wind-assisted Ardsmen claimed long range scores through Declan McManus and Dineen, but a superb third from the in-form Cleary, followed by a Paddy Henry free had the sides level for the third time.

Cleary could do no wrong and edged his side back in front, but three long range frees from Johnson, one a monster effort from 85 metres, gave Down a 1-8 to 0-10 interval lead.

Derry reeled off four points at the start of the second half, through Convery, Cleary, Patrick McCloskey and Henry, but they conceded a second goal when James Coyle collected from Johnson to beat Daryl McDermott with a firmly struck shot.

When Down substitute Scott Nicholson hit the target in 48th minute, the sides were level for the 10th time.

Sean McGuigan and Brendan Cleary stepped up their game around the middle, and Derry pushed ahead again, Alan Grant and Antron Rafferty adding to their tally.

Going into the final 10 minutes, Derry led by 0-21 to 2-10, after Convery had driven over a 95-metre free, and while Down pulled back scores through Johnston and Coyle, there was to be no denying Tom McClean's men as they booked their place in the final for the first time.