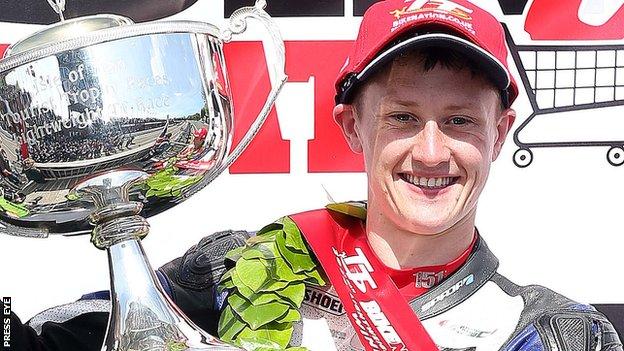 England's Dean Harrison completed a memorable week for his family by leading from start to finish to win the Lightweight TT for Supertwins race.

They become the first father and son to win TT races in the same year.

A third English rider, James Cowton, was a further nine seconds behind in third in Friday's race.

Keith Amor set the fastest lap of the race at 118.99mph on his final circuit.

Harrison had already enjoyed a successful week on the Isle of Man, having taken second in the Superstock race and coming fourth in the two Supersport events.

The Harrisons join a select band of fathers and sons who have triumphed at the TT, including Robert and Michael Dunlop, Tony and David Jefferies and Tony and Michael Rutter.

"I have had a good week but this is just fantastic. The bike never missed a beat, conditions were perfect and I'm totally chuffed," enthused Harrison.

The top three finishers were all on board Kawasakis, as were fourth-placed finisher, Amor and Jamie Hamilton who was fifth.

Olie Linsdell completed the top six on a Paton, while Ryan Farquhar had to settle for seventh on his return to TT racing after a year sabbatical.

Lincolnshire's Ivan Lintin, who had set the fastest time in pracitce, retired early on lap one, while Fermanagh's Lee Johnston called it a day at the end of the opening lap.

Michael Dunlop opted to sit out the race to concentrate his efforts on the Senior TT after finishing well down the practice speed leaderboard.