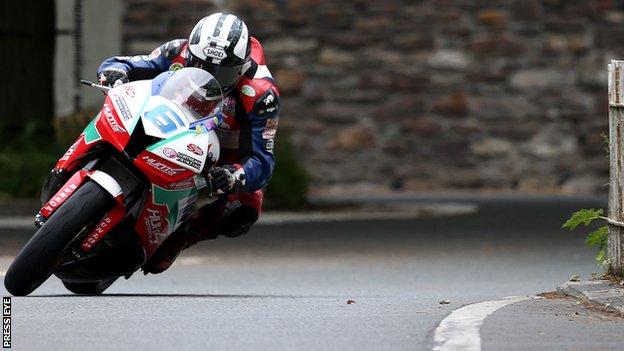 Michael brought his tally of wins to 10 by winning Wednesday's Supersport race Two and now has his sights on Friday's blue riband Senior event.

He can now equal or better the totals accumulated by McCallen, and another island legend Steve Hislop, this year.

"Long-term you must be looking at him catching Joey," said McCallen.

"Michael's young - he has at least 10 years left in him at the top and he could win at least two races every year.

"That could potentially take him over the 30 mark.

"He is undoubtedly the best road racer in the world at the moment and he has earned all his wins. It is not as if other people are breaking him down and handing him victories on a plate."

Dunlop is on track to repeat his four-timer of last year after occupying the top step of the podium in the Superbike, Superstock and Supersport Two events, but the Senior remains the most prestigious prize of TT week.

"Everyone remembers who won the Senior and it is the most lucrative financially for the riders," explained McCallen who won four TT races in a week in 1996.

"Michael has been saying all week that he can go faster if he needs to and I believe him.

"His tactic is to go fast on the opening lap and break the opposition, but he just goes at whatever speed he needs to in order to win the race.

"The move to BMW presented him with a fresh challenge and it has made him more determined to win with another manufacturer, following the success he enjoyed with Honda last season.

"BMW have given him a good package and they are using a different strategy with Michael.

"They are not putting any pressure on him and they're giving him whatever he wants, flying people in from the factory in Germany to work on the bikes.

"He's just a naturally gifted road racer, he's hungry and he has matured a lot. He still has a bit of a wild side to him, but he is only interested in winning races."

Before the six-lap Senior, the Lightweight race for Supertwins is scheduled to take place over three laps on Friday morning.