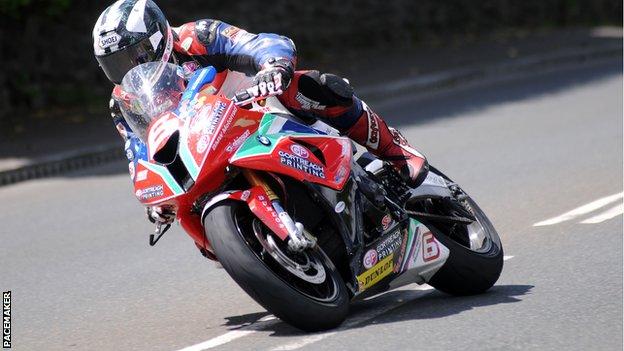 Northern Ireland's Michael Dunlop clinched his second TT win of the week with a commanding performance in the delayed four-lap Superstock event.

The 25-year-old now has nine career wins at the Isle of Man meeting.

BMW man Dunlop led throughout and his winning margin over runner-up Dean Harrison was 20 seconds.

Afterwards race organisers announced that Sheffield rider Karl Harris had been killed in an incident on the second lap of the race.

In a separate incident, Lincolnshire's Gary Johnson sustained a broken collar bone after coming off his machine near the town of Ramsey.

Following Johnson's accident, there was little doubt that Dunlop would repeat his Superstock success of last year.

"This place is special and I just love winning here. The BMW didn't miss a beat and the tyres worked great," said the Ballymoney man, who had won the Superbike race on Saturday.

"I have won this class on a Honda, a Kawasaki and a BMW, and credit has to go to BMW for putting together such a great road bike. I could have gone faster if I needed to."

Dunlop set the fastest lap of the race at 129.78mph on his second circuit.

Dunlop's advantage after the third lap was 18 seconds.

Australian David Johnson was fourth but Manxman Conor Cummins, who was fifth to cross the line, was given a two-minute penalty which dropped him to 18th place.

As a result, Fermanagh man Lee Johnston was promoted to fifth, while Michael Rutter was sixth.

Dan Kneen from the Isle of Man came seventh and newcomer Peter Hickman eighth after setting his fastest lap of the week at over 126mph.

Guy Martin retired at Parliament Square on the third lap while contending for a top-six place.

The winner's brother, William Dunlop, retired at the end of the third lap while lying ninth.

Michael Dunlop now joins the likes of Bruce Anstey and the late David Jefferies on nine TT victories, and with three more rides to come this week, he could well improve on that.