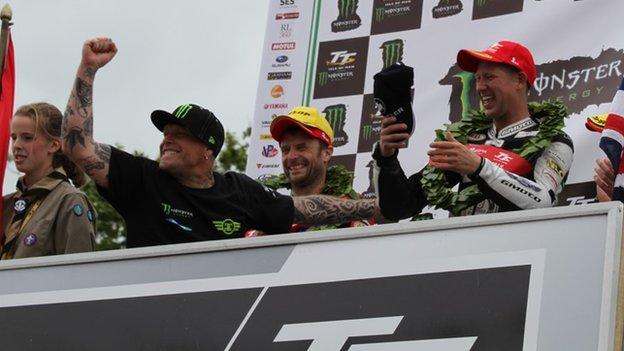 Lincolnshire rider Gary Johnson took victory in Monday's Supersport Race 1 at the Isle of Man TT after a thrilling battle with Bruce Anstey.

Johnson, 33, led from the start, although Anstey produced a brilliant final lap to reduce the margin from four seconds to only 0.1 at one stage.

But Johnson held his nerve late on the last lap to win by 1.5 seconds as he took his second career TT victory.

The Superstock race was postponed until Tuesday due to a poor weather forecast.

It was scheduled to take place on Monday evening but now goes ahead at 12:15 BST on Tuesday.

Monday's race programme had been delayed because of mist surrounding the island and wet roads caused by overnight rain.

Johnson, who had been fastest in Supersport practice with a 125.93mph lap, gave Triumph their first TT success since Anstey's victory in 2003.

The result means the Englishman, whose previous TT win came in Supersport Race 2 in 2011, also gave Smith's British Supersport team a victory in their first year at the Isle of Man meeting.

"This feels even better than my first win and I can't thank the team enough," said Johnson, who set the fastest lap of the race at 126.73mph on his second circuit.

"I didn't have the slickest of pit stops so I had some ground to make up after the second lap.

"The conditions were quite tricky up the mountain as it started to rain - I thought they may even have stopped it."

His lead was then reduced to one second following the pit stops, but a 2.5-second advantage was restored following lap three.

Padgett's Honda man Anstey closed to within 0.1 seconds in the latter stages of the final lap, but Johnson did enough to take the win as the conditions became difficult.

Manxman Conor Cummins retired at Ginger Hall on the fourth lap while lying in fourth place.