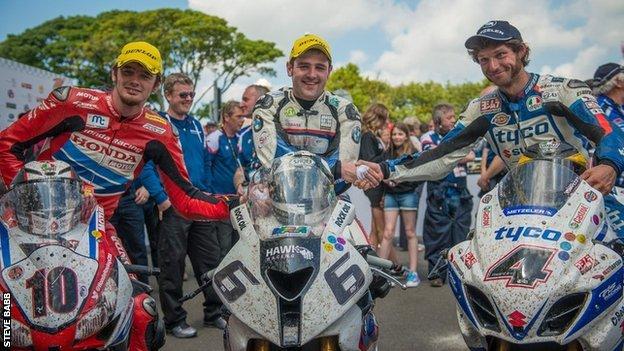 Michael Dunlop ended BMW's 75-year wait for victory in the 'big bike' class at the Isle of Man TT with a stunning win in Saturday's Superbike opener.

The Ballymoney man broke the absolute lap record on his first circuit at an average speed of 131.73mph.

The 25-year-old upped the record to 131.89 on his second lap but fourth-placed finisher Bruce Anstey improved that again with an amazing 132.30 on the final lap.

"I went flat out from the start and then nursed her home in the later stages - I knew I had a good lead over Guy," said Dunlop.

"I'm over the moon for everyone involved with the team," added the Northern Ireland rider, who has backing from the BMW factory in Germany and the Buildbase British Superbike team.

Martin and Cummins occupied second and third positions throughout, with Anstey recovering from a poor start to clinch fourth in record-breaking style.

Michael Rutter and William Dunlop completed the top six leaderboard, with 20-time TT winner John McGuinness having to settle for seventh as he continues to feel the effects of a wrist injury.

Dunlop will start as favourite to add to his tally of successes in Monday's Supersport and Superstock events.