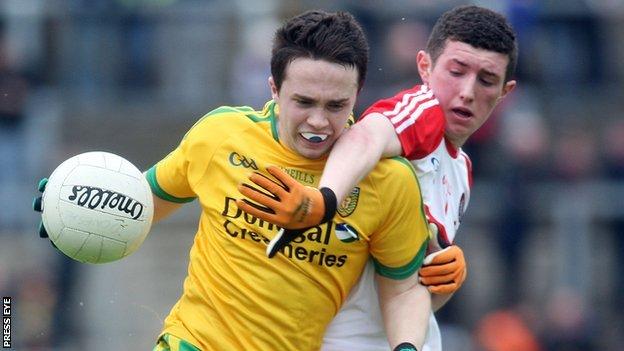 Donegal Minors beat Derry 1-10 to 0-8 at Celtic Park to secure a place in the Ulster MFC semi-finals.

The game was in the balance until the Tir Chonail lads delivered a late flourish to see the game out.

A memorable solo goal from Jamie Brennan in the 11th minute was just reward for Donegal's superiority.

Donegal led 1-6 to 0-3 at the break and while Derry dominated the second half and reduced the gap to two points, they also missed a host of chances.

Donegal were in control right from the start, full forward Jon Campbell laying down a marker with three points in the opening five minutes as they moved ahead by 0-4 to 0-1.

Brennan's goal saw them in complete control, and when it came to defending, they did it in typical Donegal fashion.

Strength in numbers at the back presented the Oak Leafers with major problems as they endeavoured to break through a wall of yellow shirts.

Their three first half points came from distance, two of them from Danny Tallon, the other from Jack Doherty.

Cian Mulligan, Micheal Carroll and Caolan McGonigle hit the target for Donegal, who led by six at the break.

It was left to three Donegal subs, Gavin McBride, Stephen McBrearty and Ethan O'Donnell to score the late points that sealed it for Declan Bonner's side.