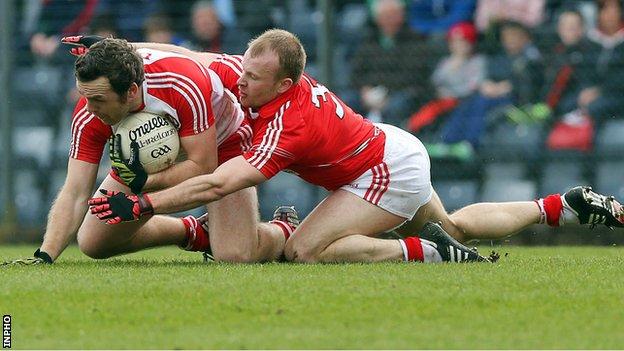 Fergal Doherty missed a chance to snatch a Division One draw away to Cork in Sunday's match at Pairc Ui Rinn.

The Ulster county showed showed fantastic character to fight back after Cork had opened by scoring a goal and five points without reply.

Lynn scored another goal and Derry were within a point when the last kick of the game by Doherty drifted wide.

It was a heartbreaking way for Brian McIver's men to lose their unbeaten record but it means four league wins out of four for Cork under Brian Cuthbert.

That left Cork fans anticipating a huge half-time advantage but those two goals from Lynn and McGuckin gave the Oak Leafers renewed hope.

Lynn saw his first effort blocked by keeper Ken O'Halloran but the ball went off the Derry man and into the net.

Then, when James Kielt played the ball in, it fell favourably for McGuckin to score the visitors' second goal and leave Derry just 2-4 to 2-9 in arrears at the interval.

Derry kept up the momentum after the break and Lynn's second goal, along with points by Lynch and Doherty and a Benny Heron free, saw them cut the deficit to a single point.

Two late Colm O'Neill frees proved crucial and Derry's scores by Lynch and full-back Chrissy McKaigue were not quite enough.