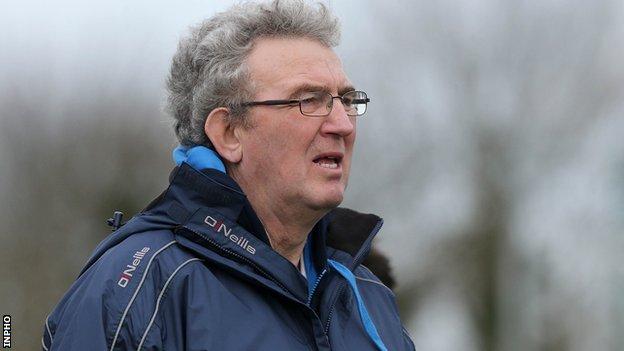 UUJ have conceded Wednesday's final McKenna Cup game against Cavan due to the unavailability of players.

Exams, injuries and students representing their counties are the reasons given by Jordanstown for pulling out of the Breffni Park match.

UUJ lost their two opening two games, against Down and Antrim, in Section C of the competiton.

The forfeiture of the fixture will re-ignite the county v college Dr McKenna Cup controversy.

Queen's manager Anthony McGrath said earlier this month that universities are being robbed by counties of their star players.

Joe Kernan was appointed to mediate between counties and universities over the availability of players.

Derry boss Brian McIver said on Sunday that university teams are being treated "very poorly" in relation to player availability.

In contrast to Tyrone manager Mickey Harte, McIver added that he has "absolutely no problem with lads playing for the universities".

"This decision has not been taken lightly and UUJ have explored all avenues to avoid having to take this course of action," said the university.

"We want to put on record that we do not wish to disrespect our opponents on Wednesday night or indeed the McKenna Cup competition itself.

"The McKenna Cup is a competition which UUJ look forward to each year and which we have derived enormous benefit from participating in.

"We look forward to participating in the McKenna Cup fully again in 2015."

Down play Antrim at Newry in the final Section C match of the competition on Wednesday night.

Meanwhile Donegal manager Jim McGuinness has named a strong side for their Section A game at home to Queen's.

Neil McGee and Neil Gallagher, who both came on in the victory against Armagh on Sunday, will make their first starts of the season.

Nine of the side that started the 2012 All-Ireland final have been named in the team.

Donegal need a win to have any hope of reaching the semi-finals at the weekend.

Fermanagh have been dealt a blow ahead of their clash with Monaghan at Brewster Park as a shoulder injury has ruled out experienced centre-back Barry Mulrone.

Conor McManus could make his first appearance of the season for Monaghan after being named on the bench for the Enniskillen game.

The Devenish clubman broke down 10 minutes into the second half as the Ernesiders lost to Derry at Owenbeg on Sunday.

Tyrone need to avoid defeat against Armagh at Healy Park to guarantee a semi-final spot.

Mickey Harte has made 10 changes from the win over Queen's with Ronan McNamee, Ciaran McGinley, Peter Harte, Conan Grugan and PJ Lavery the players to retain their places.