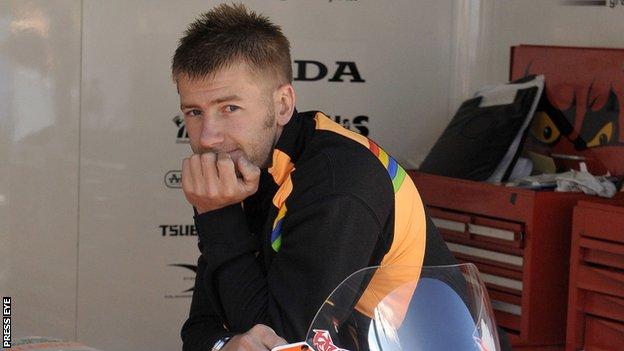 Ian Hutchinson is to make his Northern Ireland road racing comeback at the North West 200 in May.

Hutchinson missed most of the 2012 and 2013 seasons after having surgery on a leg injury sustained in a crash at a British Supersport meeting in 2010.

The Yorkshire man and Australian Josh Brookes will be racing for Milwaukee Yamaha at the North West.

The pair might have to miss the Isle of Man TT races because new technical regulations have been introduced.

However, organisers of the NW200 say they will continue to operate under the same machine spec rules as 2013.

This means Huitchinson, nicknamed the Bingley Bullet, and Brookes will be on the starting grid at the Triangle circuit on their Yamaha YZF R1 machines in both Superbike races.

Hutchinson is also scheduled to compete in the Supersport and Superstock classes.

The 34-year-old will want to pick up where he left off in 2010 when he won at every international road race, including a Supersport victory at the North West and five TT wins in a week on the Isle of Man.

Brookes made his North West debut in 2013 and finished seventh in the opening Superstock race.