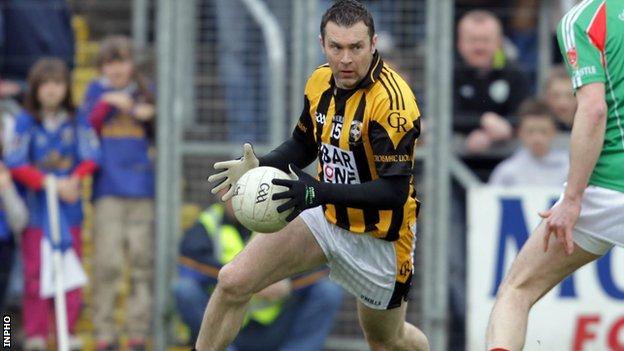 Oisin McConville and John McEntee have taken over as joint-managers of Crossmaglen Rangers after Joe Kernan stepped down from the post on Tuesday.

The duo were key players in the club's unprecedented All-Ireland success during the last 15 years.

McConville retired just seven months ago after a stellar playing career at club and county level.

Kernan, who led the club to three All-Ireland titles between 1997 and 2000. was in his second spell in charge.

He stepped into the breach this year following the surprise resignation of Tony McEntee and Gareth O'Neill in February.

The duo led the club to back-to-back All-Irelands but quit after missing out on a three-in-a-row, losing this year's All-Ireland club semi-final to St Brigid's.

Kernan always only intended to stay for one season to stabilise the club in a difficult year.

Despite the loss of six county players due to injury and emigration, he led the team to a 41st county SFC title before suffering an Ulster club quarter-final replay defeat to Kilcoo.

McConville won six All-Ireland and 10 Ulster club titles with Cross while McEntee hung up his boots with following the All-Ireland club success in 2011.

He managed Armagh club Culloville to the county intermediate title later that season, taking them to a first Ulster club final where they lost by one point to Derry side Craigbane.

McEntee has been out of football for the past year due to exam commitments but Crossmaglen supporters will hope the emergence of the 2002 Armagh All-Ireland winners as a new 'dream team' will lead the club back to the winners' enclosure.