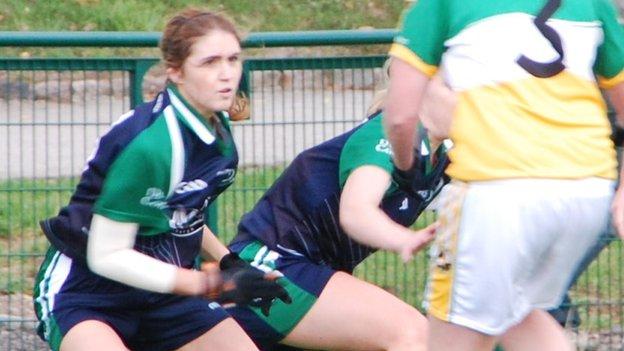 The 23-year-old from Fermanagh was knocked down by a bus while at university in Coleraine and she sustained a broken elbow which she still can't bend fully.

On Saturday, though, she will play at full-back for Scottish side, Dunedin Connollys, in the All-Ireland Junior final against Na Gaeil from Kerry.

That's right, a Scottish team in the All-Ireland Championship!

Every year, the team which wins the British Championship goes into the All-Ireland at the quarter-finals stage.

After winning the British Championship, they went on to upset the odds and beat Ulster champions, Shane O'Neill's from Armagh, in the All-Ireland quarter-final and Longford side St Helen's in the semi.

Katie, who hails from the Lisnaskea Emmetts club, has enjoyed success at this level before. In 2011, just one year after her accident, she won an All-Ireland Intermediate title with the Fermanagh side.

If we won, it would be really unbelievable

On Saturday, she will bid to make history with Dunedin, as they attempt to be the first Scottish team to win the Junior competition.

Previously Dunedin Connollys only competed in the University league, but a rule change this year meant they were no longer allowed to take part.

They decided to enter a team in the British Championship, after winning the Páidí Ó Sé tournament in February. What started out as a team bonding weekend in Kerry sowed seeds of aspiration and now they find themselves in an All-Ireland decider.

Na Gaeil now stands between Dunedin and a place in the history books. It would be a massive achievement for the club and for Katie personally, should she collect her second All-Ireland medal.

"It is a completely different experience I suppose but if we won, it would be up there with the win with Lisnaskea. It really would be unbelievable!"

Katie joined the team at the start of the year, after taking up an optometrist position in Fife. She lives in Edinburgh and decided to join a GAA club in order to meet new people, but never anticipated it would bring her to such heights again.

"Katie has been one of our strongest backs this year and is one of the more experienced players on the team, she has been a great help to me," he said.

A panel of 30 plus will board the flight on Friday evening from Edinburgh and Katie will be the sole Fermanagh representative on a team made up of all Irish players, bar one Scot and one Canadian.

Counties Tyrone, Monaghan, Antrim and Donegal will all be represented on the team travelling for Saturday's match in Laois.

Travel, by the way, which has been paid for after frantic fund-raising efforts like pub quizzes and cake sales.

Katie's mother Janet, father Paddy and younger brother Matthew all travelled to Birmingham for the British Championship final against Wolfe Tones, to Edinburgh for their All-Ireland quarter-final and to Longford for their semi.

This Saturday they'll be on the road once more to cheer Katie and her Edinburgh team-mates.