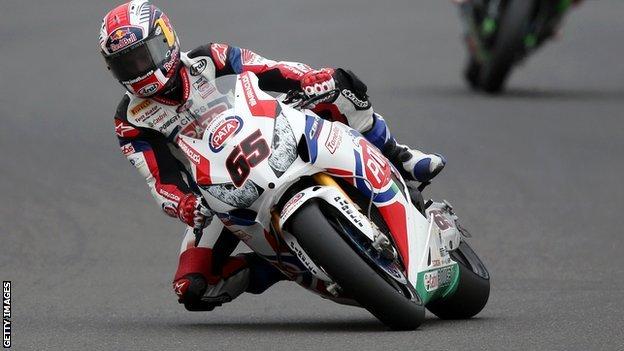 Jonathan Rea has described how he could "feel his leg breaking before he stopped moving" after crashing in Sunday's German World Superbike round.

Rea suffered a fractured femur after hitting oil laid down by another rider.

"As I hit the deck everything appeared to be in slow motion and I could see some oil on the track," said Rea.

"I need to be smart with this, manage it in the right way and come back when the time is right for me, when I'm back at a good level physically."

The Ballyclare rider says he does not want to put a time frame on his return but he looks set to miss the four remaining rounds of this year's World Superbike series.

"I hope to return to the Isle of Man on Wednesday and I just want to get on top of my injury," explained the Pata Honda rider.

"I can remember a lot about the crash as I wasn't knocked out and knowing that my leg had been broken was the most horrible thing.

"The surgery went well though and the doctors have asked me to put weight on my leg already so I've been up walking on crutches.

"With the nail inserted in my femur I can walk unaided, though not for too long.

"I feel like I am riding better than ever and I want to come back even stronger after this setback."

Rea won a race at the recent World Superbike round at Silverstone and lies seventh in the championship standings.

He was lying fourth in the first of Sunday's two races at the Nurburgring circuit when he fell heavily on the penultimate lap at turn eight.