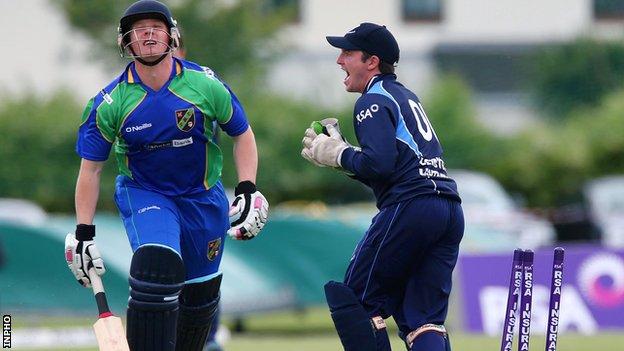 Leinster Lightning had emphatic wins over the North West Warriors and the Northern Knights in Friday's T20 matches at Sydney Parade in Dublin.

Pace bowler Max Sorensen followed up his five-wicket haul against Australia A by taking three wickets for 13 as the Warriors were dismissed for 78.

Leinster scored 81-3 in 11 overs to win by seven wickets.

In the second match, Pat Collins and Barry McCarthy inspired Leinster to a 58-runs win over the Northern Knights.

Man-of-the-match Collins scored 66 from 54 balls as Leinster racked up an imposing 177 for four in their 20 overs.

The Railway Union opener shared an opening stand of 65 in just 6.2 overs, with Bill Coghlan (27) as Leinster exploded out of the blocks.

Greg Thompson, the youngest Irish international before Eoin Morgan came along, showed his prowess with the bat with a quickfire 33 from 23 balls before becoming one of Alex Cusack's three victims.

Albert van der Merwe (2-21) dismissed Lee Nelson and Nikolai Smith in successive deliveries, and despite a brief flurry from David Simpson (14 not out), the Knights were all out for 119.

The next T20 action will be at Comber on Tuesday 16 July.

Before then Leinster Lightning and Northern Knights clash in the Inter-Provincial Championship three-day game at College Park, Trinity College, starting next Tuesday, 25 June.