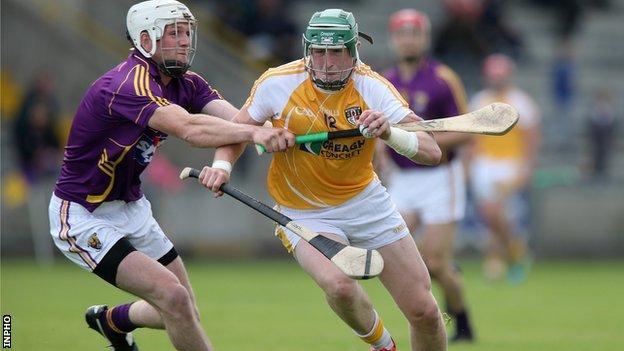 Antrim lost by 10 points to Wexford in the preliminary round of the All-Ireland Hurling Qualifiers at Wexford Park on Saturday.

The home side led 2-5 to 0-9 at the break thanks to a 17th-minute goal by full forward Podge Doran and another by Rory Jacob on the stroke of half-time.

Wexford had the wind in their favour in the second half and Paul Morris added their third goal after 56 minutes.

Antrim will face either Down or Derry in the Ulster Hurling Final on 7 July.

That semi-final will be staged on Sunday 30 June at the Athletic Grounds, with the final a week later at Celtic Park.

The Saffrons fell to a surprise six-point defeat by Laois in the Leinster SHC first round last month. Kevin Ryan's side having beaten Westmeath in their preliminary round game.

Antrim failed to take full advantage of the breeze in the first half as they came in two points adrift, despite four points from McManus and further scores from McNaughton, Neal McAuley and Christopher McGuinness.

The Saffrons had moved to within three points of their opponents by the 49th minute, with the scoreboard reading 2-10 to 0-13.

Morris's goal made the score 3-12 to 0-15 and his side ran out comfortable winners to book a place against Carlow in Phase One next weekend.