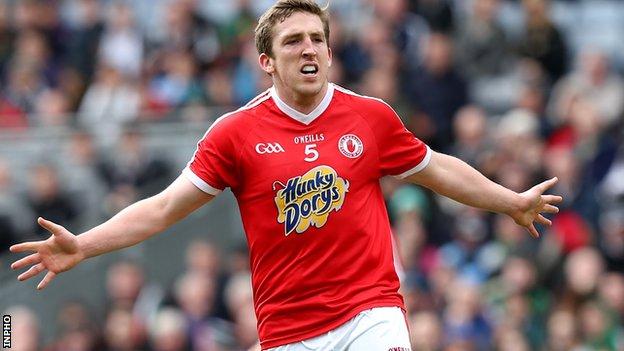 Red Hands defender Dermot Carlin is expected to miss the All-Ireland qualifier against Offaly in a second injury blow for Tyrone in as many days.

Carlin broke his nose for the second time in three weeks in a club game and is almost certain to be sidelined for the first-round qualifier.

It follows the news on Monday that goalkeeper Niall Morgan is ruled out for the season with a knee injury.

Clonoe keeper Mickey O'Neill has been called into the squad as cover.

The experienced Pascal McConnell will take over in goal for the Offaly game.

Free-kick specialist Morgan was stretchered off during a club match after sustaining knee ligament damage.

With a projected recovery time of four months, the Edendork clubman has no chance of featuring for the Red Hands again this summer.

Carlin initially suffered a broken nose in the Ulster SFC defeat by Donegal.

The Killyclogher player was also injured in a club game, despite wearing a protective mask.