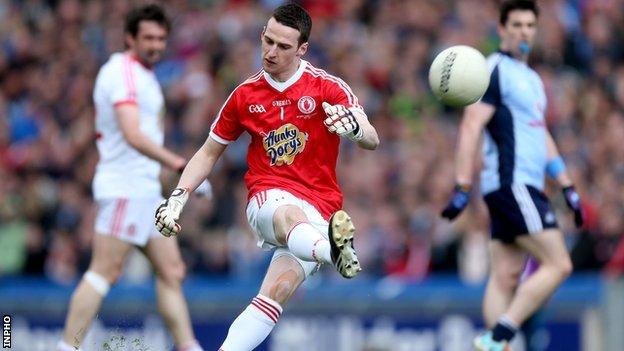 Tyrone have been drawn to face Offaly away at Tullamore in the first round of the All-Ireland Football Qualifiers.

However Red Hands goalkeeper Niall Morgan has been ruled out for the season after suffering a knee injury while playing for his club Edendork.

Free-kick specialist Morgan was stretchered off during the match after sustaining knee ligament damage.

Derry will entertain Sligo, Fermanagh travel to Westmeath, Antrim are away to Louth and Armagh will host Wicklow.

The loss of Morgan will come as a major blow to Tyrone, who found themselves in the qualifiers after losing to All-Ireland champions Donegal at the quarter-final stage of the Ulster SFC.

The 21-year-old will undergo surgery on Tuesday at the Ulster Clinic in Belfast to repair lateral collateral knee ligaments damaged in the club game against Derrytresk at the weekend.

With a projected recovery time of four months, the Edendork clubman has no chance of featuring for the Red Hands again this summer.

He was among the team's top scorers in the National Football League, kicking 18 points from long range frees as the Red Hands reached the Division One final.

Pascal McConnell is set to step in as net-minder for the qualifier clash against Offaly.

Manager Mickey Harte will now have to call up another goalkeeper as cover and he may turn to another experienced man, treble All-Ireland winner John Devine, who recently announced his inter-county retirement, in a bid to persuade him to re-join the squad.

In the other qualifier ties, Galway will take on Tipperary, Laois are pitted against Carlow and Longford will play Limerick.

The first match to be played will feature Carlow and Laois at Dr Cullen Park on Friday 28 June.

The ties involving Armagh and Wicklow and Derry and Sligo will be staged on Sunday 30 June, at 15:00 BST and 17:00 BST respectively.

The games involving Tyrone, Antrim and Fermanagh will be played on Saturday 29 June, with 15:00 BST throw-ins.

Dates and throw-in times to be confirmed