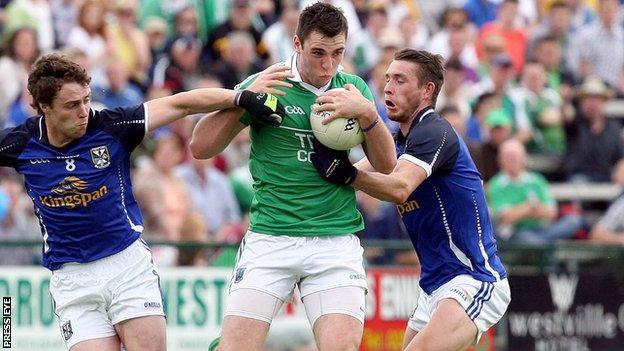 Fermanagh manager Peter Canavan said his side's 10-week break in competitive action was to blame for their slow start against Cavan at Breffni Park.

The Erne men did not score in the first 25 minutes and were four down at half-time before losing 0-13 to 0-11.

"Cavan had already played in the Championship and were up to the pace much better than us," said Canavan.

"The benefit of having played recently worked for Cavan and we are left to rue our bad start."

Even so, having seen his side fight back to draw at 11 points each, Canavan expected Fermanagh to snatch victory at the end.

"I felt that if we were within touching distance with five or 10 minutes to go we could win it.

"I was expecting a big finish from our boys and maybe with a bit more composure they would have won."

"No quarter was asked or given. It was all about bravery," he said.

"At the end, our lads were breaking through and won the frees when they were brought down."

Looking ahead to a 29 June semi-final clash with neighbours Monaghan, Hyland added: "We had a good battle with them in the league and just came out on top.

"If we work as hard as we did today, we will not be far away."