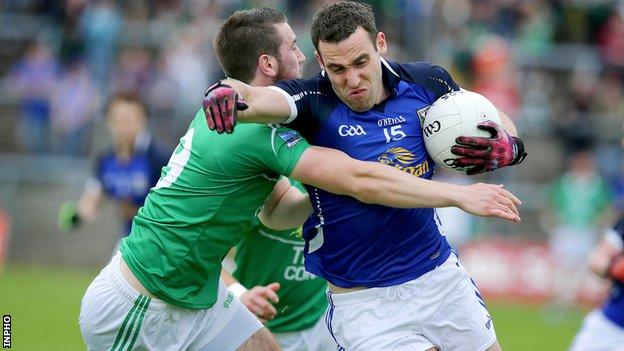 Terry Hyland's men could have been more than 0-7 to 0-3 ahead after kicking eight wides in the first half.

Fermanagh responded to draw level at 11 points each but Martin Dunne scored the last two points to seal Cavan's win.

Cavan will play neighbours Monaghan in the semis on 29 June with Fermanagh in qualifying action on the same day.

Fermanagh boss Peter Canavan felt the fact his team had not been in competitive action for 10 weeks worked in Cavan's favour.

Certainly the visitors, who beat Armagh in the preliminary stage, looked to be waltzing to victory as they breezed into a three-point lead courtesy of one point from Damien O'Reilly and two by Niall McDermott.

A frustrated Canavan, a multi-medal winner in a glittering playing career with Tyrone, was sitting with his head in his hands at this stage.

It was not until the 26th minute that Ryan Jones landed the first point for the Erne county.

Substitute Tomas Corrigan and Declan McCusker were to add to that tally but scores by Cian Mackey, Dunne plus two by Eugene Keating saw Cavan lead by four at the turnaround.

Fermanagh looked a different team immediately after the break with Owen Donnelly landing a fine point in the first minute.

A Daniel Kille free and a Martin McGrath point then cut the gap to just one.

However. scores by Kille, Corrigan and Sean Quigley boosted Fermanagh before two Kille frees brought them level at 0-11 each.

Fermanagh may have been expected to go on to win it, but Dunne scored from play and then landed the last score from a free to leave Canavan still seeking his first Championship victory as the Erne boss.