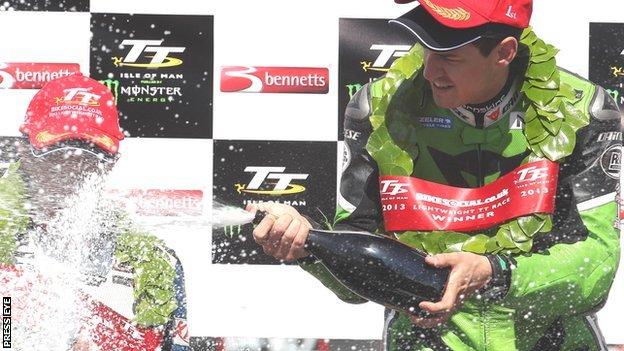 James Hillier secured his first TT victory with a start-to-finish win in the three-lap Lightweight race for Supertwins machines.

The Englishman set the fastest lap of the race at 119.13mph on his first circuit, a new record.

Cummins saw off the challenge of Ivan Lintin by just four seconds to complete the podium.

Hillier, runner-up to Ryan Farquhar in the inaugural Supertwins outing last year, led Harrison by eight seconds after a first lap of 117.96 and extended that to 14 by the end of the second.

KMR Kawasaki riders Jamie Hamilton and Michael Rutter made up the top six.

"I'm speechless, that was awesome - the bike went perfect and the team has worked very hard," said Hillier, from Ringwood in Hampshire.

"The competition may not be as strong as the other races but I loved every minute of that."