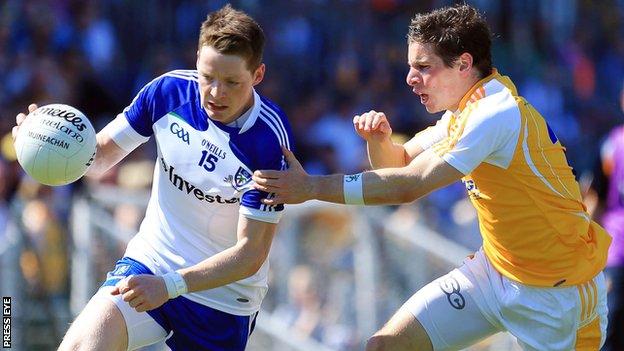 A misfiring Monaghan still proved far too strong for a poor Antrim side in Sunday's Ulster Football Championship clash at Casement Park.

Monaghan won despite hitting 16 wides and despite having Neil McAdam sent off with 30 minutes remaining.

At that stage, Monaghan led only 0-6 to 0-5 but they hit the next five scores to snuff out the Saffron challenge.

Conor McManus top-scored with four points for Monaghan while the Saffrons paid for a lack of attacking adventure.

After a Paddy Cunningham point levelled the contest a minute into the second half, Frank Dawson's side failed to score again until Michael Pollock's injury-time free.

In truth after losing their way in the second quarter, the departure of centre half-back McAdam, after his second yellow card, seemed to shake the Farney men out of their slumber.

The introduction of the strong-running Stephen Gollogly two minutes after McAdam's dismissal boosted the Monaghan attack while Dessie Mone's enterprise also helped Malachy O'Rourke's side take complete control in the middle third of the field.

Monaghan went into the game as strong favourites after their successful Division 3 campaign.

The Saffrons had endured a dismal league, suffering relegation to Division 4, with the departure from the squad of men such as the McCann brothers Tomas and Michael, Tony Scullion and James Loughrey also reducing the Saffrons' playing strength.

The match went to the pre-ordained script in the opening 20 minutes as Monaghan moved into a 0-5 to 0-1 lead.

McManus (two), Darren Hughes, Paul Finlay and Owen Duffy hit Monaghan's early points as they were able to build easily from the back thanks to short uncontested kick-outs - by dint of Antrim's defensive approach.

Granted, Antrim's opening point in the ninth minute could - and probably should - have been a goal as their only real attacking threat Kevin Niblock ran straight through the Monaghan defence before blasting over the bar from 12 yards.

Antrim didn't score again until a towering Sean McVeigh point in the 24th minute and the midfielder repeated the dose two minutes later with another fine long-range score.

The Saffrons should have been presented with another point moments later when Monaghan keeper Rory Beggan clearly picked up the ball off the ground in the large parallelogram but Niblock's free on 30 minutes left the minimum between the teams.

However, the Saffrons then suffered a massive blow as Niblock - who had been dominating his battle with McAdam - suffered an ankle injury which forced his departure at half-time.

Paddy Cunningham missed a free-taking chance to level the contest in first-half injury-time but he made amends a minute after the restart to get his team on terms.

At that stage, Monaghan were threatening to snatch defeat from the jaws of victory and while Mone quickly restored their lead, the Farney men looked to have been dealt a blow on 40 minutes with McAdam's dismissal.

But as so often happens, the loss of a player only served to rally Monaghan with the introductions of Gollogly, Tommy Freeman and Drew Wylie in the final half hour also helping to steady Malachy O'Rourke's side.

The busy Christopher McGuinness (two) and McManus both tagged on two points apiece in the final 25 minutes with Freeman also looking lively as he got on the scoresheet.

In truth, Monaghan should have been out of the sight on the scoreboard long before the final whistle as they fired some awful wides.

As for Antrim, despite some defiance from Frank Dawson after the final whistle, it's difficult to see them having a prolonged run in the qualifiers.

Tenacious Saffron tackling and their blanket defence tactic did contribute to a number of the Monaghan wides but Antrim simply never committed enough bodies to attack to have a genuine chance of winning.

Sean Kelly, who has made his name at a classy attacking wing-back, rarely got forward while the loss of Niblock meant that they had negligible attacking threat in the second period.