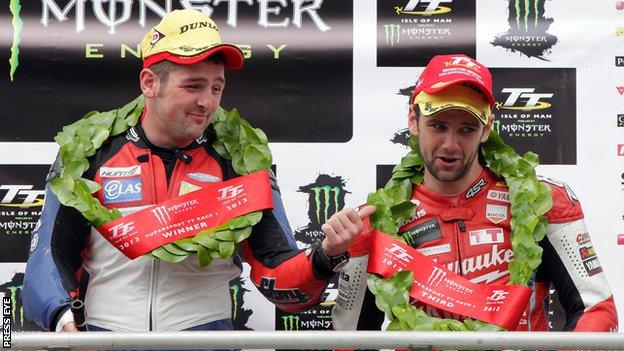 Michael Dunlop brought up his haul of Isle of Man TT victories this week to three as he won Monday's Supersport and Superstock races.

Dunlop was joined by his brother William on the Supersport podium with Bruce Anstey taking second.

The Ballymoney man was 10 seconds ahead of New Zealand Anstey with William a further 13 seconds back in third.

Johnson led by three seconds at the start of the final lap but Dunlop produced a remarkable last circuit to clinch a 16.5-second victory.

I've never seen anyone ride the TT like that

The Northern Ireland rider was five seconds adrift of Johnson after the opening two laps but the Kawasaki rider had no answer to that final scintillating lap from Dunlop.

The 24-year-old had won Sunday's Superbike event in style and his two victories on Monday brought up his haul of wins at the Isle of Man meeting to six.

"It's hard to believe what I have achieved here. I gave it everything on the final lap and I just love racing round here," said a triumphant Dunlop.

McGuinness admitted that he was astonished by Dunlop's performance in the closing laps.

"I've had my time, I have to hand the baton on," said the Morecambe rider.

"I've never seen anyone ride the TT like that. I was speechless about how fast Michael was riding."

The Superstock podium finishers were followed by Dean Harrison in fourth, with Bruce Anstey fifth and James Hillier sixth.

Guy Martin retired on lap three while contesting for a top four position, while Cameron Donald and Conor Cummins were forced to call it a day earlier in the race.

Dunlop comes from a legendary Northern Irish road racing family with his uncle Joey having won a record 26 times at the Isle of Man meeting and his father Robert a five-time winner on the course.

Joey Dunlop died in an accident at a race in Estonia in 2000 while Robert Dunlop lost his life at the North West 200 meeting in 2008.

In the earlier Supersport race, Dunlop set the fastest lap at 127.52mph on his second circuit, just short of his own record from 2010.

William held a slender early lead but by the end of the opening lap, Michael was four seconds ahead of Anstey, with the elder of the Dunlop brothers two seconds in arrears of the Kiwi.

The leader's advantage settled at 10 seconds for the remainder of the four-lap race and as if to emphasise his superiority he crossed the line first on the road in a new race record time.

"The bike was mint, although I struggled to get going in the first couple of miles," said Dunlop after the Supersport race.

"I wanted to come out and stamp my authority on the race and then I cruised home in the last two laps."

Manx hope Conor Cummins retired at the end of lap one and Gary Johnson came to a halt at Quarter Bridge on his MV Agusta early on the fourth lap.

Dan Kneen was the leading Isle of Man finisher in 11th, while Ballyclare's Jamie Hamilton was 12th in only his second year at the TT.